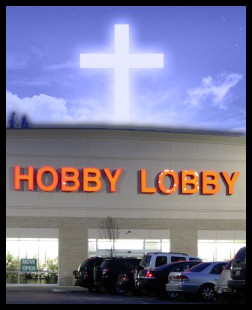 The Affordable Care Act (ACA, or "Obamacare") mandates that preventive care under group health insurance plans include a "full range" of FDA-approved "contraceptive methods". That requirement has resulted in two cases now pending before the U.S. Supreme Court which may result in "religious rights" being extended to so-called "corporate persons".

The cases are brought by two different for-profit corporations, each arguing that the mandate violates the corporate employer's rights under the Religious Freedom Restoration Act of 1993 (RFRA) and the Free Exercise Clause of the First Amendment to the U.S. Constitution. Neither of the cases involve non-profit religious institutions, which are exempt from the ACA's contraceptive mandate.

The RFRA, which was signed into law by President Bill Clinton in 1993, requires that an otherwise neutral government action "not substantially burden a person's exercise of religion" absent a compelling governmental interest.

The government, in its Supreme Court petition [PDF], argues that the "contraceptive coverage" mandate does not "substantially burden" an employer's free exercise of religion. (More on that particularly point in a subsequent article on this.) But while additionally urging that the contraceptive coverage mandate is based upon a compelling government interest, the government sets forth a number of significant ACA benefits that have been obscured by the fog of the unrelenting right wing, anti-Obamacare propaganda war. The critical threshold issue that must be met in these cases, before any of those additional issues need be reached, entails the validity and/or scope of the controversial concept of "corporate personhood".

Will the religious rights of actual persons now be extended to fictional corporate "persons"? That is one of the key issues that will now be decided by the same U.S. Supreme Court which handed down the now infamous Citizens United case...

In the two other cases, Conestoga Wood Specialties Corp. v. Sebelius [PDF] (3rd Circuit, 2-1 decision) and Autocam Corp. v. Sebelius (6th Circuit) the courts found virtually the opposite, sharply disagreeing with the premise of the Hobby Lobby case. A for-profit corporation, those two appellate courts ruled, is not a "person" either with respect to the Free Exercise Clause of the First Amendment or within the meaning of the RFRA.

As we previously observed in "'Move to Amend' but is 'Corporate Personhood' Valid Even Under Existing Constitution?", Supreme Court Justice Sonia Sotomayor created a stir when, during oral arguments in Citizens United vs. Federal Election Commission, she not only questioned the validity of the corporate challenge to limits on campaign spending, but questioned a legal doctrine which dates back to an 1886 case, Santa Clara County vs. Southern Pacific Railroad Co. Sotomayor observed that it was the courts who "created corporations as persons, gave birth to corporations as persons," and that "an argument" could be made "that that was the court's error to start with...[imbuing] a creature of state law with human characteristics."

That 1886 case was the product of judicial activism searching for a means to place the rights of corporate wealth and power over the power of individual states to protect the health, safety and welfare of their citizens. "Corporate personhood" was established not by the body of the court's opinion but by the overreach of the Supreme Court's reporter, J.C. Bancroft Davis, a former president of the Newburg & New York Railway. Davis took it upon himself to insert statements made by Chief Justice Morrison Waite during oral arguments into a headnote when the decision was published. That headnote has, ever since, been interpreted as a legally binding U.S. Supreme Court precedent.

Two former renowned Supreme Court Justices, Hugo Black and William O. Douglas, vigorously contested the validity of the "corporate personhood" concept in several dissenting opinions. More recently, in his Citizens United dissent, Justice John Paul Stevens observed that "corporations have no consciences, no beliefs, no feelings, no thoughts, no desires." Yet, the right wing Citizens United majority ruled in that case that corporations have the same right to free speech as living, breathing human beings. That ruling has not only given rise to a populist movement to overturn and/or mitigate the damage done by Citizens United in some fashion, but to adopt a constitutional amendment that would establish that corporations are not people and that money is not free speech.

In arriving at their respective decisions in Conestoga and Autocam, the 3rd and 6th Circuit Courts of Appeal were constrained by the fact that the majority ruling in Citizens United was binding, insofar as it applied to free speech rights. They were also faced with the provisions of the Dictionary Act, which establishes that, unlike the provisions of the Constitution itself, "unless the context indicates otherwise," the word "person," as used in any federal statute, includes "corporations, companies, associations, firms, partnerships, societies, and joint stock companies, as well as individual."

In those two cases, the courts overcame that hurdle. They contend that both the legislative history of the RFRA and 200 years of case law that preceded it confined the First Amendment's Free Exercise right to individuals, sole proprietors and religious organizations only.

Where Citizens United is backed by more than twenty cases extending free speech rights to corporations, the court in Conestoga pointed to Supreme Court decisions ruling that rights that were "purely personal," such as the right of privacy and the right against self-incrimination (and religious rights, in this case), have not been extended to corporations.

Both courts criticized the Hobby Lobby majority for ignoring the basic purpose of corporate law, which, they say, is "to create a distinct legal entity, with legal rights, obligations, powers and privileges different from those of the natural individuals who created" the corporation. When individuals chose to incorporate, they cannot "move freely between corporate and individual status to gain the advantages and avoid the disadvantages" of operating a business as a corporation.

The Third Circuit Court of Appeal, in Conestoga, asserted that fictional, for-profit enterprises cannot, on their own, exercise a personal religious belief...

In Autocam, the Sixth Circuit disposed of the religious objection offered by the Kennedy family, Catholics who were the controlling shareholders of two "for-profit, secular corporations engaged in high volume manufacturing for automotive and medical industries." Citing cases that generally preclude shareholders from bringing claims to enforce the rights of the corporation, the court agreed with the government that the Kennedy's lacked standing to bring the RFRA claims either on behalf of the corporation or individually.

"Incorporation's basic purpose," the Sixth Circuit observed, quoting a 2001 Supreme Court case, "is to create a distinct legal entity, with legal rights, obligations, powers, and privileges different from those of the natural individuals who created it, who own it, or whom it employs."

While Obamacare's contraceptive mandate cases provide the U.S. Supreme Court with the opportunity to revisit the validity of "corporate personhood," it would be unduly optimistic to expect that any of the right-leaning, Citizens United majority will reverse course on that specific issue.

For starters, this is not the first, post-Citizens United instance in which the Court was afforded such an opportunity. That opportunity previously arose in 2012 when the Court decided to hear a challenge to a Montana Supreme Court determination that Citizens United did not invalidate the state's century-old Corrupt Practices Act, which barred direct contributions by corporations to candidates or political committees.

In summarily reversing the Montana Supreme Court decision, the U.S. Supreme Court expanded Citizens United --- which had previously involved the constitutionality of a federal campaign finance law --- to also apply to state anti-corruption statutes. But the Court did more than that. They chose to simply ignore the assertions made by Montana Supreme Court Justice James C. Nelson that the "entire concept" of "corporate personhood" was "offensive."

"Corporations are not persons," Nelson bluntly asserted in his blistering dissent. "Human beings are persons, and it is an affront to the inviolable dignity of our species that courts have created a legal fiction which forces people --- human beings --- to share fundamental, natural rights with soulless creations of government...Indeed, it is truly ironic that the death penalty and hell are reserved only to natural persons."

That, of course, could all change now. The Supreme Court could expand the rights of the "corporate person" from free speech to include the free exercise of religion.

As will be discussed in a follow-up piece, the Court's recognition of a corporate right to speak, coupled with its equating money with speech, has enabled giant, multinational corporations, taking advantage of a near monopoly of mass communications and paid-for propaganda (aka political ads), to drown out the voices of ordinary citizens. A decision to expand the rights of a "corporate person" to a "free exercise" of its religion will enable that "corporate person" to impose its religious views (or, more accurately, that of its owner) on real live, breathing human beings (employees) with respect to their personal health care decisions.

*It is, of course, possible that a direct challenge to the concept of "corporate personhood" could be referenced in either a future government or amicus curiae brief. Indeed, if she chose to do so, Justice Sotomayor could again broach the subject, as she did during oral arguments in Citizens United.
* * *
Ernest A. Canning has been an active member of the California state bar since 1977. Mr. Canning has received both undergraduate and graduate degrees in political science as well as a juris doctor. He is also a Vietnam vet (4th Infantry, Central Highlands 1968). Follow him on Twitter: @Cann4ing.
Tweet
Reader comments follow below ad...

I am morally opposed to war, so if Hobby Lobby can opt out of the ACA because of abortion, I should be able to opt out of funding for the Defense Dept. and intelligence services.
Why should Corporate persons have more rights than a real person?

That's another BINGO...to your last question Alex. As a hometown girl who wants better management.

Merry Christmas and Happy Holidays to us all.

And that's meant as a CLARION CALL. The joke has ugly overtones and wastes money.

Let me make straight, it 's not people that fail us. It's bankrupt social policy that allows our children's future as a chip in governmental policy to profit.