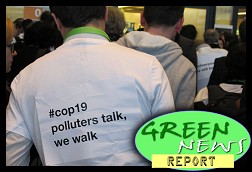 IN TODAY'S RADIO REPORT: Impasse at the UN climate summit as developing nations walk out of negotiations; Just 90 companies responsible for most of man-made global warming emissions; 'Apocalyptic' rains strike again, this time in Sardinia; PLUS: Didja hear the one about the Polish environment minister who was fired in the middle of the UN climate summit in Poland? ... All of those hot messes and more in today's Green News Report!

Nice GNR KIDDs!! B - Don't pack it in when your individual comedic SNL - level sty-lings and deliveries are both getting a little better.

Ask and ye shall receive:

''We're an empire now, and when we act, we create our own reality. And while you're studying that reality --- judiciously, as you will --- we'll act again, creating other new realities, which you can study too, and that's how things will sort out. We're history's actors . . . and you, all of you, will be left to just study what we do.''