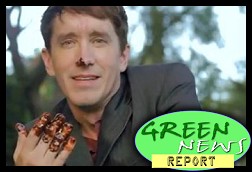 IN TODAY'S RADIO REPORT: Profits vs. People at Obama's EPA confirmation hearing; Victory for the people in the federal fracking wars; GAO says nuke evacuation plans inadequate; Climate change is coming for your wine; PLUS: Environmental groups push back against Big Oil with hysterical ads ... All that and more in today's Green News Report!

Although your lived truth is not the same as mine, can we all agree to do what is best for the whole? True to color I would start with fire-ering the text book historians that keep white people scared and the rest oppressed. Then I would go after your local government to protect you when the damn epa in conjunction with the interior dept. fell down on the job. How bout we all snort coke and give contracts to the sexiest pants?????????????

...yeah, lets just let the hog tied droner take care of it all for us...STAND UP for your plot of caring!

Some how I still feel invested in him, and I hope he tells the over lords to fuck off, and grows some. Lord knows that's zactly what we all need from him...all colors/faiths included!

Unlike Franklin you don't have to be rich sir, YOU ARE PRESIDENT, please use that good mind of yours to make possible a better future for us all...not just sum.

And it does come down to election integrity Sir. Make the standard PAPER voter marked ballots eligible to public oversight at precinct level. The start of real control. The people have your back if you give us half the chance Sir.

Sir, in my humble opinion you have yet to earn that noble peace prize. Please make voting integrity the good new fight, not one against unarmed civilians.

Re. wind energy. Ordinarily democrats reject at least the idea of crime in banking/mafia related crime sanctioned by govt. ..but not in the case of wind power. HMMM

I'm confused, Molly --- how is prosecution in Italy of "banking/mafia related crime" evidence that it is being "sanctioned by govt"? How is prosecution of corruption in Italy evidence that "democrats" in any way condone the mafia's corrupt infiltration into Italy's wind industry? Your links demonstrate that such corruption is being investigated and prosecuted. We reported on it back in January, when the arrests first took place.

We have for a long time up 'til now-a-days.

We used to call it the common good, but the plutocrats want to morph it into what really is "the common bad."

Power shift away from green illusions. This article tells how environmental groups have grown corporate. Be informed..to keep one's reputation.

"We reported on it back in January, when the arrests first took place."

Sorry. and thank you.

"I'm confused, Molly --- how is prosecution in Italy of "banking/mafia related crime" evidence that it is being "sanctioned by govt"?

Sorry that I did not make myself clear. The founder of First Wind/Cape Wind Brian Caffyn was partners in Italy with Oreste Vigorito, who has been arrested and charged with fraud.The way this is sanctioned by democratic govt.

1) After it was found that First Wind's founder had been in a partnership with Oreste Vigorito in Italy..First Wind has been charged with many criminal activities but never convicted. Here in ME, after it was found out about the Italian mob connection, First Wind was still being permitted to build wind farms.Even though , their business tactics were pretty obviously mob like i.e. slashing tires of wind farm opponents. Charges were brought in NY by Andrew Cuomo of harrassing and threatening citizens, among other things.

A wind farm built by First Wind, Stetson II, was paid for by Obama's stimulus bill.Wind farms are not supposed to be permitted in ME without proof of financing. The First Wind rep. made a statement to the bangor daily news...they did not have money to build the wind farm after it was permitted. Then it was paid for out of the stimulus bill. Democratic gov. Baldaci..who threw the doors open for anything First Wind wanted..broke many many laws in doing so. Larry Summers was marketing director for D E Shaw group which owned 42 % of First Wind...while all the building was going on in ME..Larry Summers was Obama's sec. of treasury at this time. Rahm Emmanuel was a share holder in Madison Dearborn which owned the other 42%. Summers quit his marketing director job after it was made public. Greg Palast has done some great reporting on D E Shaw Group. They are an environmental nightmare.

If you will notice democrats push wind farms and republicans are opposed. Although, I am a democrat, I have seen numerous pundits and politicians tell untruths about wind farms.It hurts me to see it, Would never have known, if one had not been built in my community.

Good Morning Brad Blog team,
I like that you are on Progressive Voices ! Thank You !!
PLEASE