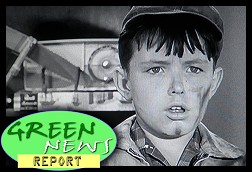 With regard to the Chinese removing a mountaintop in Tennessee,the irony is palpable.

The Chinese are practicing the same sacrosanct capitalism that conservatives and Ayn Rand lovers laud American companies for. One would think they'd be cheering the Chinese on with their hatred of the "socialist" US government and love of "free-enterprise". I guess their beginning to realize it SUCKS when you're on the receiving end of having a foreign company strip your resources for their own use. Bummer. I hope the Chinese excavate the area to below sea level.

All you have to do is look at BLS's own numbers...

Most of those jobs are sales. Yet it's STILL a pain in the fucking ass to setup a solar array. Still Home Depot and Lowes don't have MC4 connector, or solar panels in their fucking STORES! Sorry muppets, you'll need to cut that MC4 off and use a butt splice.

When's bradblog going to post pictures of their solar array? Oh that's right you don't have one.

Green News hypocrisy at it's best.

How about setting a real GOAL?

Make your green report, off grid, dump the propaganda and the UN agenda.

Okey-dokey, "Blissful Ignorance", you've doing a nice job of spamming the comment threads. Your anonymous handle is well-chosen, too.