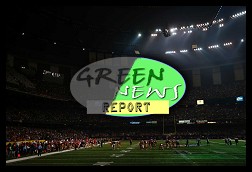 IN TODAY'S RADIO REPORT: Energy Sec. Steven Chu steps down; Record high gas prices = Big Oil profits; US carbon emissions fall; Obama to blame for Superbowl power outage?; PLUS: The Superbowl ad you didn't get to see ... All that and more in today's Green News Report!

« PREVIOUS STORY "U.S. Department of Justice Leaks 'White Paper' 'Legalizing' Murdering Americans With Drones"
» Go to The BRAD BLOG front page «
"Speed Blogging: This, That, The Other Thing" NEXT STORY »

The planet Earth is in an emergency ... which planet are you really on?