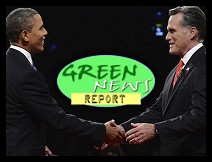 « PREVIOUS STORY "Disturbing News: Exit Polling to Be Scrapped in Some 19 States, Allowing For Much Easier Manipulation of Election Results"
» Go to The BRAD BLOG front page «
"CBS4 Miami Kicks Off Investigative Series on Overlooked E-Voting Concerns: 'Citizens Should be Screaming From the Rooftops'" NEXT STORY »

If they had asked him about global warming induced climate change and other environmental issues he could have had even more myths on his record.

That is unless he is "reinventing himself" on those issues too.

There is a report that will cause mixed reactions, in one sense, but a gasp reaction by all in another sense:


Analysts at a New York-based research firm believe that the Organisation of the Petroleum Exporting Countries’ (Opec’s) global oil reserve statements could be inflated by as much as 70%.
...
He explained certain Opec members were deliberately increasing their stated oil reserves to flout Opec regulations, which allowed oil-producing countries to only produce oil at a rate calculated as a certain percentage of its total reserves.

“We now know that the numbers are significantly inflated. The model we have built from available data shows that Opec reserve statements could be overstated by as much as 70%,” Nariani said.

Nariani, who is co-authoring a report, ‘The Race to Replace Reserves’, which is due for publication during the next couple of weeks, told Mining Weekly Online that the official figures did not add up. He said that given certain new discoveries of oil, such as in Venezuela and certain technological advances which allow for previously uneconomical known deposits to be exploited, many Opec countries continued to increase their oil reserves, without announcing any new discoveries, and, all that while producing significant amounts of oil.

(The Peak of Oil Lies). The gasp reaction comes from realizing "all that oil" gives new meaning to "all", and makes us also realize that potential for the big oil war needs to be considered much more carefully.

The mixed reaction is that this lack of oil will cause danger to arise, but perhaps will also lead to a surge of renewable energy efforts.

« PREVIOUS STORY "Disturbing News: Exit Polling to Be Scrapped in Some 19 States, Allowing For Much Easier Manipulation of Election Results"
» Go to The BRAD BLOG front page «
"CBS4 Miami Kicks Off Investigative Series on Overlooked E-Voting Concerns: 'Citizens Should be Screaming From the Rooftops'" NEXT STORY »
See MSVL and support BRAD BLOG! Click here for signed premium version!