Help keep The BRAD BLOG independent!
All of our work, including The BRAD BLOG, The BradCast and Green News
Report, is only possible thanks to contributions from readers and listeners!
Latest Featured Reports | Thursday, October 6, 2022 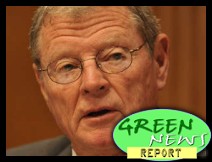 But nothing should surprise us in this twisted environment where intolerable injustices are widely ignored, from preventable hunger, poverty and disease to irreversible environmental destruction to the global oppression of girls and women; where wealth disparities are at record levels; where a war based on lies and deceptions that resulted in unimaginable carnage is heralded as a success; where the assault on basic rights and liberties is greeted with a yawn - if not a cheer; where a minor celebrity infraction receives more attention than an epidemic of sexual violence in which young girls have their insides shredded with broken bottles and sticks of wood; where a sports game arouses more passion and emotion than a million babies dying.