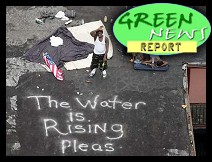 IN TODAY'S RADIO REPORT: Aid slowly reaches Pakistan as historic flooding continues; Plastic Bag Wars in California; Another BP employee pleads the 5th; Those hungry, hungry microbes ... PLUS: The 5th Anniversary of the Drowning of New Orleans ... All that and more in today's Green News Report!

The Virginia-based interest group, whose members include Exxon, Dow and plastic bag manufacturers, is a well-known player in California, where it has battled environmental bills and anti-plastic city ordinances it contends hurt businesses...