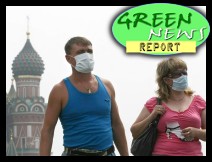 IN TODAY'S RADIO REPORT: Another oil spill, this time in MI; Record heat and smog in Moscow; Fires in CA; Competition sparks the U.S. electric car market ... PLUS: Where has all the oil gone, long time leaking? ... All that and more in today's Green News Report!

IN 'GREEN NEWS EXTRA' (see links below): Sec. Chu: Forcing people to save is a cost that I am willing to bear; Wind Drives Growing Use of Batteries; Fix the Farm, Not the Salmon; U.S. energy policy a "serious threat" to economic, national security; Pollution makes quarter of China water unusable: ministry; B.C.'s carbon tax is looking like a winner two years later; Cap-and-Trade is a Republican market solution; State Dept. Delays Decision on Trans-Canada Pipeline; New NOAA Annual Climate Report Shows We Live in a Warming World ...PLUS: Plankton decline 40% across oceans as waters warm ...