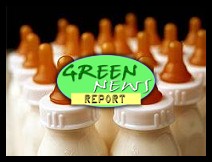 IN TODAY'S AUDIO REPORT: How 'green' is Sotomayor?; Bush and the baby bottles; PLUS: White is the new green! For roofs, that is .... All that and more in today's Green News Report!

Got comments, tips, love letters, hate mail, Supreme Court noms? Drop us a line at GreenNews@BradBlog.com or right here at the comments link below. All GNRs are always archived at GreenNews.BradBlog.com.

IN 'GREEN NEWS EXTRA' (links below): U.N. Secretary General Ban Ki-Moon and Cate Blanchett ask world business leaders to lead the way in Copenhagen; A solar roof for a Taiwan stadium; How the French deal with the nuclear waste problem; "Veggie Day" once a week for Belgian town ... See below for more!

As an architect I can vouch for Sec'y Chu's white roof recommendation. The only design caveat is to make sure you are not reflecting the glaring sunlight into traffic or some other visual safety situation.

Now you just need to choose the right type of white roofing material for your building... be it home or work or ?

Personally, personally, so totally not a wingnut, I'm still not happy about this blot on Sotomayor's record:


Second Amendment: Sotomayor was also a member of the panel that issued a per curiam opinion in another controversial case that may be headed for the Court next year. In Maloney v. Cuomo, 554 F.3d 56 (2009), the panel considered (as relevant here) a claim by a New York attorney that a state law prohibiting possession of a chuka stick (also known as nunchaku, a device used in martial arts consisting of two sticks joined by a rope or chain) violated his Second Amendment right to bear arms. The district court rejected the claim on the ground that the Second Amendment does not apply to the states. On appeal, the panel affirmed. Relying on the Supreme Court’s 1886 decision in Presser v. Illinois, it explained that it was “settled law . . . that the Second Amendment applies only to limitations the federal government seeks to impose” on the individual’s right to bear arms. The Supreme Court’s recent decision in District of Columbia v. Heller, the court continued, “does not invalidate this longstanding principle.” And while acknowledging the possibility that “Heller might be read to question the continuing validity of this principle,” the panel deemed itself bound to follow Presser because it “directly controls, leaving to the Supreme Court the prerogative of overruling its own decisions.” Maloney’s lawyers intend to file a petition for certiorari in late June.
[emphasis mine]

I'm pretty big on the Constitution and especially big on our right to protect ourselves against government perfidies, so this bit pisses me off.

Thanks ArchiCoot! And to Niners, for fixing the bum link!

Heh heh heh! I came up with the idea of painting all roofs white independently about a year or two ago, over dinner with some friends! Nice to see Dr. Chu run with my idea! ;-D

The Most Important Hour of Radio
~

Thanks for the word up!