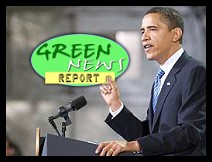 IN TODAY'S AUDIO REPORT: Obama in Iowa for Earth Day while Congress holds "The Mother of all Climate Weeks"; Marine Corps seeking Camp Lejeune vets to warn of contaminated water; suburban Chicago officials lied about contaminated water; PLUS: Intersex fish in D.C.! ... All that and more in today's Green News Report!

Got comments, tips, hate mail, gender-confused fish? Drop us a line at GreenNews@BradBlog.com or right here at the comments link below. All GNRs are always archived at GreenNews.BradBlog.com.

IN 'GREEN NEWS EXTRA' (links below): Chrysler and USPS team up for a small fleet of electric delivery vans; Home-grown bio-diesel leading to backyard fires; Autism rates higher near toxic waste dumps; the Pentagon turns focus to renewable energy sources; PLUS: Grist reflects on food as an environmental issue....See below for more!

« PREVIOUS STORY "Why Didn't Zelikow Resign When Bush Admin 'Attempted to Destroy All Copies' of His Opinion on Torture?"
» Go to The BRAD BLOG front page «
"Shepard Smith: 'WE DON'T FUCKING TORTURE!!!'" NEXT STORY »

When Big Eddie Schultz mimics cheney ... He sounds more like cheney than cheney!