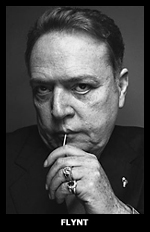 Here's an interesting development in the increasingly heated speculation about what led Sen. Trent Lott to announce his resignation from the Senate yesterday.

On Larry Flynt's website, Flynt has posted an excerpt from PageOneQ, a Washington-based website that has a record of accurately identifying closeted Republican politicians:

"Once upon a time," writes Big Head DC [another Washington-based website], "there was a twentysomething boy-next-door type with reddish blond hair and a brillantly white smile."

This boy-next-door is male escort Benjamin Nicholas, whose blog, 15 Minutes, helped him make some connections in business and politics.

One of these connections is rumored to be [Trent Lott, who is] rumored to have planned a resignation by the end of this year to avoid being scandalized by Hustler publisher Larry Flynt. Flynt had, back in June, offered cash rewards for substantiated accounts of sexual liaisons with elected officials.

To which Larry Flynt responds:

HUSTLER Magazine has received numerous inquiries regarding the involvement of Larry Flynt and HUSTLER in the resignation of Trent Lott. Senator Lott has been the target of an ongoing HUSTLER investigation for some time now, due to confidential information that we have received.

Meanwhile, at Huffington Post, the idea that Lott had any sort of relationship with Benjamin Nicholas is "put to bed" by none other than Nicholas himself:

A San Antonio-based gay male escort categorically denied Monday that outgoing GOP Sen. Trent Lott had ever procured his services, putting to bed one of the more stunning rumors to emerge following Lott's announcement earlier in the day that he was leaving Congress...

"There's nothing to be said, as Lott and I have no connection whatsoever," Nicholas wrote in an email to The Huffington Post. "How these 'quotes' have been fabricated are beyond me. The Senator is someone I have had no personal dealings with, ever."

Well, then, that settles it. I mean, what possible motive could a hooker have for lying about whether a wealthy and powerful man was or was not his client?

I speculated in these pages yesterday that Lott is resigning to become a lobbyist, and thus to cash in his 40 years in the capitol. Keith Olbermann had the same idea on MSNBC's "Countdown" last night:

Olbermann suggested instead that Lott might be motivated by new laws about to take effect which will ban former Senators from becoming lobbyists for at least two years. Sources close to Lott have told news organizations that those laws played a part in his sudden decision, but Lott himself has denied this and insists he ran for re-election in 2006 only because of Hurricane Katrina and now has no reason not to step down.

Of course, both schools of thought could be right: Lott is resigning to avoid the full brunt of the scandal and he plans on cashing in on K Street.

READER COMMENTS ON
"Larry Flynt Confirms That Trent Lott 'Has Been a Target'"
(7 Responses so far...)

Is it me or have you noticed that everytime a GOP closet case is exposed; their facial pictures ring one's gaydar off the hook.
It's like, Oh yea I see it now.
I bet he liked it a Lott.

I thought it was funny that he was a cheerleader at Ole' Miss and still rejected gay rights in the seat.

But why would Flynt arrange for a before-2008 resignation, knowing that that would leave Lott in a better position to transition directly into the congressional bribery business?

Go Larry! Good work; one more down and how many more to go ........ keep it up! They ain't-a-shamed of torture or killing soldiers & murdering innocent folks or of lying or robbing U.S. citizens of their constitutional rights, but God-forbid that they be shown to be GAY!! JEEZUS!

Lott may be in a lot more trouble than paying for man-poon. The law offices of his brother-in-law and confidante, Dickie Scruggs, have been raided by the FBI. Scruggs is in the thick of many post-Katrina lawsuits involving insurance companies.

he is actually going to replace fred thompson on law & order.