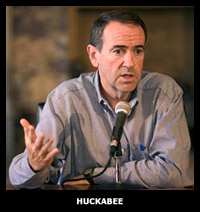 Recent polls show that Mike Huckabee, the former governor of Arkansas and Baptist preacher, is rising in popularity in Iowa, where he is cutting into Mitt Romney's lead. (Romney has 28 percent, Huckabee has 24 percent in the ABC news survey; Romney is at 27 percent and Huckabee's at 18 percent in the local KCCI-TV poll.) He's also moving up in in Florida, where he's running second to Rudolph Giuliani, 26 percent to 17 percent --- leaving good ol' boy actor Fred Thompson in fifth place with 9 percent.

With Thompson's campaign fading, Huckabee becomes the last best hope for the GOP's Christian nationalist base. Unlike Thompson, Huckabee is authentically one of them. He believes in the inerrancy of the Bible and says he does not believe in evolution. He wants to amend the Constitution to outlaw abortion, and he is the only candidate who has smeared a gay person in the debates, so far.

But Mike Huckabee comes with some serious baggage, and with his rise in the polls comes new scrutiny of his record as governor Arkansas, both in the media and by his opponents, who are quickly finding his record in Little Rock to be what opposition researchers might call a "target-rich environment."

The scandals associated with the Huckabee administration in Arkansas include:

Released Rapist Who Murdered His Next Victim

In 1996, Huckabee
made it his cause
to release a convicted rapist, Wayne Dumond. Huckabee's motivation in helping Dumond reveals serious questions about his judgment. He allowed himself to be deluded by Clinton-haters in the national media into believing that Dumond was innocent but had been railroaded because his victim was a distant cousin of Bill Clinton.

Within six months after Huckabee gave him his freedom, Dumond raped and then murdered a woman in Missouri. And then, as the scandal unfolded, Huckabee lied about his role in Dumond's release, only to have parole board members and even former staffers came forward to attest to the fact that Dumond would not have been freed without the governor's intervention.

Huckabee and his family improperly used money from the taxpayers' $60,000 per-year Governor's Mansion fund for personal expenses like dog food, pantyhose, and meals at Taco Bell.

As he was leaving office in January, Huckabee ordered all the computers and hard drives used by his staff to be wiped clean and then crushed, a wanton act of destruction of public property that cost taxpayers $335,000 bill to replace and prompted the question: What was he hiding?

Raised Taxes by Hundreds of Millions

Known in Arkansas as "Tax Hike Mike," during his term in office the state "raised taxes more $505 million per year, a figure adjusted for inflation and economic growth, according to the state's department of finance and administration. The average Arkansan's tax burden grew from $1,969 in the fiscal year ended June 30, 1997 to $2,902 in the fiscal year ended June 30, 2005. Meanwhile, during Mr Huckabee's tenure the state added about 8,000 new fulltime workers to its payroll."

According to the Republican anti-tax group, the Club for Growth, "By the end of his 10-year tenure, Gov. Huckabee was responsible for a 37 percent higher sales tax in Arkansas, 16 percent higher motor fuel taxes, and 103 percent higher cigarette taxes according to Americans for Tax Reform (01/07/07), garnering a lifetime grade of D from the free-market Cato Institute."

In the unlikely event that Huckabee should become the GOP nominee --- or in the more likely event that he's added to a Romney or Giuliani ticket to make them more palatable to the GOP's Christian nationalist base --- Huckabee's extremist religious beliefs could prove fatal to the ticket in the general election.

Here's what Matt Taibbi wrote about Huckabee's religious beliefs in the latest issue of Rolling Stone:

[Huckabee is] full-blown nuts, a Christian goofball of the highest order. He believes the earth may be only 6,000 years old, angrily rejects the evidence that human beings evolved from "primates"...

[He] recently scored a rare offend trifecta, simultaneously pissing off immigrants, Jews and the pro-choice crowd when he ludicrously claimed that a "holocaust" of abortions had artificially created a demand for Mexican labor.

As president, Huck would support a constitutional amendment banning abortion and would give science a back seat to religion. "Science changes with every generation and with new discoveries, and God doesn't," he says. "So I'll stick with God if the two are in conflict." Huckabee's well-documented disdain for science was reflected in the performance of the Arkansas school system when he was governor; one independent survey gave the state an F for its science standards in schools, a grade that among other things reflected Huckabee's hostility toward the teaching of evolution.">

With a record like Huckabee's, Republicans would be fools to put him on the ticket next year --- and Democrats should pray that they do.

Ah yes, the truth comes out again....actually thought or a while this guy might be a moderate. I spose the new came for the Republican party should be the "Repubocrite" or "Hypocrilican" party, naye?

...and he's changing his name to "Fuckabee" to boot!

atleast he got some germs and dust off those harddrives before He CRUSHED them. Much like mighty US warlock, Premiere Bush, who has crushed his Iraqi enemies.

All who stand in the way will be CRUSHED by his might fist of justice!

This guy is crazy, I saw him on the Daily Show, and he was dancing around all the questions. He looks crazy.

OMFG - IT'S A CIRCUS FREAK SHOW ON CNN !

Calm down judge that's the republican you tube debate.

One of the main qualifications of republicans these daze is to be able to scrub a hard drive.

Hey, the huckster may inherit the wind of the gipper the gyper.

Huck is from K-Pax