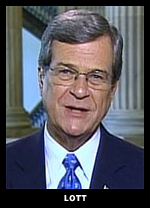 Are they jumping ship or do they just think lobbying is a higher calling?

How much do you want to bet that he's retiring because of his involvement in the Alaska lawmaker/lawbreaker debacle that's being exposed right now by the FBI?

The article posted above doesn't state the real reason behind his motives, the one at Raw Story does.

By resigning before Jan. 1, 2008, Lott will dodge new ethics laws that would require him to wait two years before taking on a lucrative lobbying gig in Washington, NBC correspondent Kelly O'Donnell reports.

I can't help but wonder why;

These republicans are bailing out like gerbils in a burning bathhouse . . .
Hmmm...

I'm wondering if Sibel Edmonds knows something we don't about ol trent.