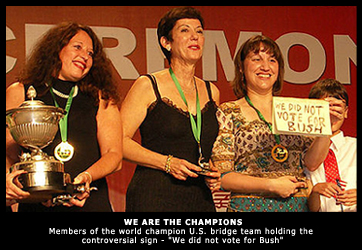 The members of the world-champion U.S. womens bridge team who faced harsh sanctions because they held up an anti-Bush sign during awards ceremonies in Shanghai last month have struck a deal with their professional organization, the United States Bridge Federation (USBF).

As the tournament was playing out, they were barraged with questions and criticism of George Bush and his policies by players from other countries. When they took the stage after they'd won the championship, one of Americans held up a hand-lettered sign that read, "We did not vote for Bush."

After the incident made international news, the women received emails from fellow members of the USBF who remain in Bush loyalists accusing them of "treason" and "sedition." But the harshest reaction came from the USBF leadership who threatened to impose a draconian settlement on the champions:

It [called] for a one-year suspension from federation events, including the World Bridge Olympiad next year in Beijing; a one-year probation after that suspension; 200 hours of community service "that furthers the interests of organized bridge"; and an apology drafted by the federation’s lawyer.

It would also require them to write a statement telling "who broached the idea of displaying the sign, when the idea was adopted, etc."

Alan Falk, a lawyer for the federation, wrote the four team members on Nov. 6, "I am instructed to press for greater sanction against anyone who rejects this compromise offer."

The sanctions had the distinct odor of Bush-era fascism about them, which led to an even greater uproar. Free speech advocates were up in arms. Supporters of the bridge team compared them to the Dixie Chicks, the all-female group from Texas who were ostracized by country music fans several years ago after they expressed shame that Bush was also from their home state.

But now the controversy appears to be mostly smoothed over:

The women have agreed to a statement recognizing the federation’s right to request that bridge teams representing the country refrain from using awards ceremonies for anything other than accepting medals.

The team’s nonplaying captain, Gail Greenberg, was not part of the settlement...

Ms. Greenberg, winner of six world championships, said she wanted to talk to her lawyer, Norman Siegel, the former director of the New York Civil Liberties Union, before accepting the agreement.

"A stipulation of this agreement is that both the USBF and the team will not take legal action against each other," she said.

"Although I’m not vindictive and have no intention at this moment of suing," she continued, "I don’t want to lose my right to sue in the future if, one, they do some harm to me that I’m not currently aware of or, two, that they feel free to write in their bulletin anything they want about me."

This is obviously not your mother's bridge game.

For some reason I see a vision of preznit blush singing "Bridge Over Troubled Waters" ... and laugh out loud.

Meanwhile the fuck-alls fiddle while the neoCons burn a "rome" near you.

I kind'a figured it wouldn't be long before the board and leadership of the USBF
(United States Buggery bridge Federation) would fold it's hand ... since their only real purpose seems to be to support the "Champs" collect dividends squat at the gop trough while keeping a low profile . . . We are not talking about the top of the conservation food chain with unlimited legal funds . . .

Treason for telling the world you didn't vote for the sitting president? A great majority of the country did not - are they treasonous, also?

The USA is in dire strats, indeed, with thinking like this far too common.

This doesn't surprise me... freedom of speech & democracy are part of America's history. Fascism is the name of the Bush Neocon game plan.

The radical Neoconservative Republican crowd screwed up America and its economy... big time.

What average American, the Bush Administration, Fed and Wall Street can't see coming is the American Economy, which purchases over 30% of all goods manufactured in the world, has been "debased."

Under both Regan and the Bush's Neoconservative Republican leaderships, who's creed was "Greed and Supply-side Economics' ", the administrations legislated tax breaks for corporations and the Elitist top1% of Americans at the expense of the other 99%. Couple this with a collapse of the mortgage banking industry & housing prices, a liquidity crisis and pending student loan catastrophe. Then add in years of Union busting, NAFTA, CAFTA, Vietnamese, Central America and other Trade agreements, hundreds of thousands of H1-B & L-1 work visas, years of outsourcing jobs to 3rd world countries and open borders which eliminated the higher paying jobs, pensions and benefits for a majority of Americans.

The huge amount of spendable income/benefits these high paying jobs formerly supplied America and the World Economy has disappeared... gone forever. Resulting in a gigantic transfer of wealth from average Americans to the world’s Elitist top 1% and coffers of Corporate America.

As HBO's lead character in John From Cincinnati once said… "The end is near".