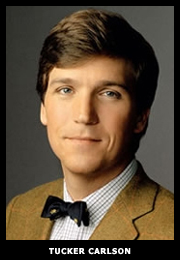 On the Monday after Carlson's sad little sign off, the New York Times reported that MSNBC was in talks with Rosie O'Donnell to host a show on the network.

The Times suggested O'Donnell would replace Dan Abrams in the 6 p.m. slot --- against Larry King on CNN --- but I had my doubts. Abrams recently returned to the air full time after a stint as the network's general manager. His show isn't doing that much better than former GOP congressman Joe Scarborough's did in the same hour. (Scarborough was moved to Don Imus' old early morning slot.) But Abrams is smart, polished and occasionally funny, plus he's a lawyer and the next time a huge scandal with legal dimensions pops up --- and we are long overdue --- his show will get numbers.

MSNBC's talks with Rosie fell through --- a fact that was a devastating blow to at least one group --- television trivia buffs. She would have been the fourth person in the NBC news family named O'Donnell, which has to be a record of some sort. Can you name the other three? (Answers below.)

As a former regular viewer of "Crossfire," CNN's battle-of-the-talking-points show which Carlson co-hosted for a number of years, I was surprised when MSNBC announced they were giving him his own hour --- a misguided attempt to attract viewers from Fox, I suspected --- and I've been surprised ever since that they have kept him on the air.

There have been stories floating around in media circles for a while now that Carlson's agent has been pitching him to host game shows (and who can forget his stint on "Dancing with the Stars"), so maybe Tucker sees the writing on the wall and is preparing to exit gracefully when the inevitable happens.

If MSNBC wants to hire a liberal host to replace Carlson (or whomever), here are a few people they should consider:

READER COMMENTS ON
"Are Tucker Carlson's Days at MSNBC Numbered?"
(20 Responses so far...)

Tucker is the first of more to come; the pendulum has swung and the trite drama laden GOP speaking points that these non journalist pundits spew is not resonating. Americans are tired of the unethical GOP congressmen, Administration and particularly Bush's lies, failures and deceit.
It's a new day.

I heard him on a Bill Maher show a few weeks ago, and I found him loud, obstinate, spewing lies for facts and couldn't wait for New Rules, just to shut that obnoxious guy up! No one else could hardly get a word in edgewise. Good riddence!

Wasn't it fucker carlson that brought us the story in

when he has to resort to guests like tom delay and ken blackwell . . .

Phil Donahue was not fired for low ratings. He had the highest rated show on msnbc and his ratings were rising at the time. He was fired because the White House demanded that he be fired for criticizing Bush's war against Iraq. It was political censorship pure and straight

OT send this to everyone who cares ;
PENTAGON INSIDER HAS DIRE WARNING

Tucker Carlson is trash.The only one on MSNBC that speaks truth to power is Keith Oldermann. The rest of them is a waste of time

I believe Donahue was fired for his opposition to the Bush "run up" to war, his 20/20 hindsight. So, bring Donahue back! That said, I think Ed Schultz would make a good replacement for f\ucker Carlson, especially with Ed's recent realization that the DLC demorats have abandoned him and particularly his strong position to holding the Demoratic leadership's feet to the fire!

Can we bring Jon Stewart back one more time to bitch-slap him though? Just for old times' sake.

Or perhaps Tucker could confess: "I'm hurting America. I'm a partisan hack. I'm tired of being the Bush administration's monkey."

It's simple: Tucker Carlson STINKS! Don't read too much into it beyond that...whoever hired him in the first place was an idiot!

Every time I see Carlson on TV I am tempted to send an email asking hoe Clarabell is doing.

I wish Mike Gravel could host a talk show.

Good riddance to this slimey little turd of a man.

Tucker is an ass, but when he made that comment about the 8 viewers, I thought he was being witty and thought that was one of the only funny things he had ever said.
In the interest of what liberals need, which is on air voices, and what the network wants, which is viewers, I would suggest that they dispense with the older and more fringe talking heads and put David Schuster and Rachel Maddow together for an hour.
Its just a matter of time before each of them is either given a show at MSNBC or snatched up by another network, what with the turn in the tides and the dearth of good liberal talkers who attract a younger crowd.
It would also behoove them to get on the ball some sort of hip round table show including comedy type pundits, much like the original Lizz Winstead ideal for Air America: I would so love to see a round table show with the likes of Sam Seder and Marc Maron bringing on a panel of smart and funny commentators, like Maher sometimes does successfully...but the addition of various bloggers would be a definite plus.

But yeah...good riddance to Tucker...
All he leaves behind is the heinous Willy Geist, who has managed to climb up the butt of Joe Scarborough in his brief tenure as an on air personality...sheesh!

Tucker is a supporter of Ron Paul and has had him on his show several times. This shows him to be a man of great courage and someone who really cares about America.

For those who don't know, Ron Paul is the greatest statesman in US history.

Tucker (Fucker) Carlson is one of the most obnoxious, insulting, misleading, deceiving, tangent off the question, lying, hoodwinking, finagling, fact bending, super suckup to the right JERK broadcasters on ANY TV network.

If he used that quick brain and fast tongue for any GOOD purpose, he'd be successful and have ratings too, which now, he does NOT, which is why his show is ready to bite the dust. I switch to CNN when he comes on...I simply can't STAND him.

I'll be cheering when MSNBC finally kicks his ass off. ANY present or former Air America host or any Jones Network host would be a fantastic lead in to our champion of facts, truth, decency and FUN, gutsy Keith Olbermann, easily the BEST host on cable news and who's show I rarely miss, particularly his Special Comments!

I am a big fan of Tucker Carlson, even when not always agreeing with him.

But generally speaking I agree with his libertarian Republican bent, as opposed to blowhards like Hannity and Fox Noise, etc.

I like Olbermann for his wit and for his lambasting of blowhards like O Reilly, but his ratings are driven by his constant anti Bush rhetoric whether deserved or not
(nota bene.. I can't stand Bush, but I call them like I see them)

Voices like Scarborough's and Carlson's are sorely needed for a more balanced presentation of viewpoints as opposed to Olbermann.

I like Tucker's guests.. and I especially like the banter between him and them.. it's often very amusing.

even if you don't agree with Carlson, he often puts a very interesting spin on things.

Mike comment #17 , Tucker Carlson is NOT a supporter of Ron Paul. Yes he has had him on his show but it wasn't to show support, but rather to ridicule him. Tucker Carlson is the person who invited his pimp friend and his whores to Ron Paul's rally in Reno and then reported that Ron Paul was supported by pimps and hoes. Goodbye Tucker, you won't be missed!