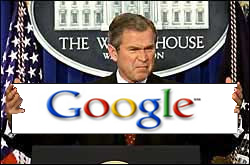 Over 70 million searches are done each day on Google. The Bush Administration want access to Google's search data as well as the pages contained in the Google database.

In the following report from CNN, legal analyst Jeffrey Toobin suspects that the Bush Administration considers the Google search records too important to be left to the decision of a court. He concludes that Google and the government will reach an agreement for sharing Google's records before the court is allowed to create a precedent on the conflict.

"And, there is no such thing as a right to privacy in the constitution.

Only a right of unreasonable searches and seizures and there must be a warrent."

Uh, no, privacy, like any other right you can imagine, is protected by the 9th amendment. The specification that no "unreasonable searches and seizures" is just detail on how the government can protect a right while executing it's other duties.

Isn't it amazing that Bill Gates' father employed Abramoff. This make me pause and wonder just how extensive is this conspiracy of the Rich to use any and all means to take all the major oil reserves of the world and to turn America into a dictatorship.

BTW, bloody revolution isn't necessary or beneficial. Revolution of a peaceful kind, such as Gandhi and MLK promoted, is all that may be necessary. The sheer numbers of common folks overwhelms the Rich without question. If you have a unified position then the Rich can do little but run away.

Nope, violence is what we argue against --- both physical AND economic & political.

So, Bush is bypassing the courts again? That's OK. OOPS! I almost forgot, I'm not a robotic "party before country" rightwinger...that's NOT OK to bypass the courts!

Look, Paul, EVERYTIME Bush breaks the law he has an excuse that stupid rightwingers can "echo"

Wiretap - "So you're for terrorism?"

Paul, you just don't get it, and you are a stupid idiot, because YOU are exactly the kind of person they want these catch phrases to appeal to.

Iraq War - "So you're unPatriotic?"

Suppressing news - "So you want to hurt the troops?"

How stupid can you be, Paul???

The concept of conservatism is to protect OLD MONEY at any cost...

The concept of libralism is to explore NEW WORLDS & IMPROVE LIFE ThE cost COURAGE & BRAVERY. . . .

Paul, Licky and ilk, are they kids themselves?, they sure act like it

He violates the Constitution that he swore to uphold.
He destroys the freedoms he claims to protect.

Google me this, Mr. President:
Fuck you, and fuck off.

"Google me this, Mr. President:
Fuck you, and fuck off."

I tried it and got

Do you love drug trafficking, Paul? Will you allow the police to randomly strip search you put on a rubber glove and probe you? Why not? Do you love drug dealing? Why do you want to give little black babies crack, Paul? You fucking lemming.

Don't ever bitch about your scared right to guns, because you have proven that the Constitution is nothing more than a Handi wipe to you.

And then one day things weren't quite so fine
I fell in love with Lily
I asked my Dad where Lily I could find
He said, "Son, now don't be so silly"

For me and Lily are together in my dreams
And I ask you, "Hey mister, have you seen, Pictures of Lily?"

The WHO Blew the Stones off the stage on the Concert for 9-11 Townsend is one of the Great's.

How ridiculous this CNN report is and LIES! (once again).

I can see EXACTLY who visited my site and Identify them by IP Address. I can also see the city the viewer of my page comes from.

Therefore this video is LYING to you when the so called "expert" says people cannot be identified.

Don't worry people, freedom is on the march:

LOOK at the TOP RIGHT CORNER. THERE you are identified. That information is stored in a google log too.

All they need to do is a search by IP for date and time. IP's are owned by your Internet Service Provider. They can see what account was assigned that IP at that particular time.

No nothing to see here.

PLEASE do check it out.

IP addresses can be spoofed. This can make it difficult or impossible to trace (though I spose NSA etc. could probably eventually get to the bottom of most spoofing).

E.g., skilled hackers can make it appear that an IP address is someone else's. They can send emails, attachments etc. and make it look like they are coming from another IP or email address. It is possible to hijack emails midstream. I found out about this a couple of years ago from a friend who's a linux user and a security semi-expert.

There are ways that a non-hacker can find out some things when it seems that someone is not posting as their "real" selves or when it seems that an IP address is being spoofed. However it can be time-consuming and involve waiting for someone to get careless. Real hackers probably have more tools at their disposal for uncovering things like this.

IP addresses are not always what they appear to be.

Actually, an IP can still be traced. But most likely skilled hackers would not be deliberately trying to use a spoofed IP address when surfing and searching google.

We are talking about average americans IP addresses. for instance, if they found my personal IP address in the database it would easily be traced as belonging to Comcast. Upon contacting Comcast, they could trace that IP to my account by my name.

I certainly am no hacker nor do I know how to spoof an IP address. However, I do know what my IP address is . . so does Comcast and that would be a good starting point for Feds to show up at my house because I frequent sites that are NOT in line with our fascist government.

Whether an IP address is "spoofed" or not, I would strongly estimate that the majority of people are not professional hackers to do this.

Even so, IF the government wanted to "spoof" an IP address and find someone to do this, they most certainly could do so and create false evidence.

Over the years, when Black Ice Defender has shown a hack attempt I've useed Neotrace Pro to run a trace on them. Typicaly I am able to get within one or two nodes of the source, but beyond that no information is available.

Of course these are hackers who go through proxies and other means of hididng their tracks. The average person has all their information located at a whois data base, which reveals your ISP and your location.

Finally got around to checking your website - now I'll never get away from this computer! LOL

Have you heard his solo works - The Iron Man or White City?

this is foolish, all the guys at google have to do is tell dubya that all the information he could possibly want is already on google-- sit him at a computer and let him go-- that'll keep the moron occupied for a couple of years--

I find this interesting - I thought about the 463 hits at google news and figured most would be from foriegn countries.
Ran through the list and found 37 foriegn, a couple dozen with no point of orgin listed and the rest were from the US.

Oh and by the way I found this there: Liberal World Turned Upside Down by Facts

This is all pure bullshit people. Has Bush done anything, or said anything to make us think he is telling the truth? This is more about investigating dissenters than anything else. Osama is dead, that tape is a lie.

impeachment...mm(Bush thinkin).. Why is the word peach in impeachment? I woulda sworn peaches only grow in red states and yet it seem folks in red and blue states are doing a Google search - IMPEACH BUSH. don't get it. How did they figger it out?

Paul: Did you know Goofy is a fan of the Bush Administration??? uhh uhh.. and he actually blogs at this site uhh uhh..
Free advice: If you ever get lost and accidently leave Disney, go directly to the Wizard of Oz and tell him you want a transplant of a cloned of Einstein brain.

Bluebear2 #25 White City is Outstanding! I will have to check out Iron Man sometime.

in an interview, one of the co-founders of Google asked this question (paraphrased):

Glad you like it. I am hopeful you will find my site of use.

Paul I agree that kiddie porn is a sickness that that must be policed and dealt with. But just handing over a list of searches to the government is not going to give them what they are looking for. So what, you Google “sex” how does the government know that you aren’t a minor? Oh well now we need to know all your personal information. And then we need to have all the searches from this individual so that we can judge whether or not this person is a commie, pervert, and traitor…whatever, by whoever’s standards.
This is why this is so important for these types of issues to be dealt with through the Justice System, so that everyone rights are protected. I suggest that you read the Bill of Rights to see exactly what rights you do have and start fighting to protect them. While I would fight to the death for this country I am not naive enough to believe everything the government tells me, and I feel it is my “right” to know the truth and consequences of their actions.
:blush:

OK I'll stop now. I was beginning to sound like a broken record.

That may be impossible ... for you to grasp!

I will not Soon Forget How yahoo, aol & msn Rolled Over Like Cheap Whores to bush's gestapo & stormtroopers.