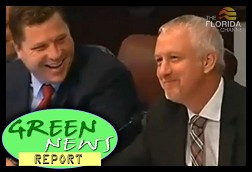 IN 'GREEN NEWS EXTRA' (see links below): India to Rich World: Give us Cash and We’ll Cut Emissions Faster; Study shows acceleration in decline of Antarctic ice shelves; Has California’s mega-drought already begun?; Exxon Shareholder Climate Vote Blocked, Chevron's Approved by SEC; The hidden benefits of cutting coal pollution... PLUS: Shut Up and Dance: Should we stop talking about climate change and start dancing about it?... and much, MUCH more! ...

We need to get really serious about those who are denying the reality of global warming induced climate change.

These people will be in the cockpit once elected or appointed, and they can then lock the cabin door (Inside Job and/or Conspiracy?).