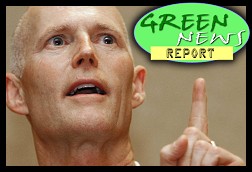 IN 'GREEN NEWS EXTRA' (see links below): Rate of climate change predicted to soar in 2020s; 10 myths about fossil fuel divestment; EPA failed to warn residents about contaminated water; The promise of energy storage; Time to worry about exploding Siberian craters?; Houston Ship Channel closed after collision and MTBE spill; Millions of songbirds slaughtered in Cyprus ... PLUS: How the Merchants of Doubt push global warming denial on your television... and much, MUCH more! ...

"DEP does not have a policy on this," Tiffany Cowie, department press secretary, wrote in an email.

Scott spokeswoman Jeri Bustamante wrote in an email: "There's no policy on this."

« PREVIOUS STORY "Politics of Stupid as Far as the Eye Can See"
» Go to The BRAD BLOG front page «
"Graph of the Moment: 'Job-Killing Obamacare'" NEXT STORY »

Keep up the good work.

« PREVIOUS STORY "Politics of Stupid as Far as the Eye Can See"
» Go to The BRAD BLOG front page «
"Graph of the Moment: 'Job-Killing Obamacare'" NEXT STORY »
See MSVL and support BRAD BLOG! Click here for signed premium version!