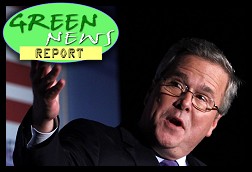 IN TODAY'S RADIO REPORT: Congress wraps up for the year with Republican anti-environment initiatives to be signed by the President; UN climate summit wraps up in Peru - ALL nations are in for final talks in Paris; PLUS: Another Bush, another climate change denier... All that and more in today's Green News Report!

IN 'GREEN NEWS EXTRA' (see links below): Remembering the genius who got BPA out of your water bottles, and more; Jan.-Nov.2014 the hottest ever recorded; Why the US-China climate deal is a true game-changer; Solar efficiency breakthrough from Australia; Fact or Fiction? Can geoengineering solve our global warming problem?; Saudi Arabia 'playing chicken with its oil' ... PLUS: Climate Change Takes A Village: as the planet warms, a remote Alaskan town shows just how unprepared we are ... and much, MUCH more! ...