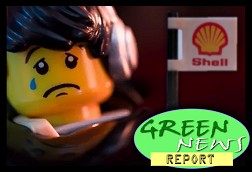 IN TODAY'S RADIO REPORT: Republican candidates continue to dodge the climate change question; Mountaintop removal coal mining promotes lung cancer; 'Significant' oil spill in Louisiana bayou; 2014 on track to be hottest year on record; PLUS: LEGO breaks up with Shell Oil... All that and more in today's Green News Report!

CORRECTION: Today's episode of the GNR incorrectly identifies Rep. John Yarmuth (D) as a U.S. Congressman from West Virginia. In fact, he represents Kentucky. We apologize for the error!

IN 'GREEN NEWS EXTRA' (see links below): Republicans: "I am not a scientist" on climate change, but let me advise you on Ebola; Rooftop solar: utilities must adapt or die; Extinction watch: only 6 white rhinos left; Zombie glacier surprises glaciologists; Oceans to lose $1 trillion in value due to acidification; New Method factory will be world's largest rooftop farm... PLUS: A Man For All Seasons: Remembering Rick Piltz, Climate Science Whistleblower... and much, MUCH more! ...

« PREVIOUS STORY "On the Upside in Texas..."
» Go to The BRAD BLOG front page «
"In Memoriam: Ben Bradlee" NEXT STORY »

"The rate at which humans cut down on greenhouse gas emissions ..."