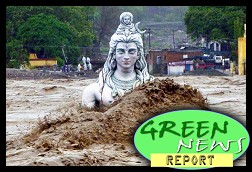 IN TODAY'S RADIO REPORT: Good news: President Obama creates the world's largest marine sanctuary; Bad news: humans have wiped out half of the world's wildlife; Scientists find humans to blame for Australia's hottest year in history; PLUS: A major oil company joins Google in breaking up with Rightwing climate change-denying front group ALEC... All that and more in today's Green News Report!