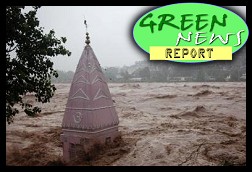 IN TODAY'S RADIO REPORT: Catastrophic floods in Pakistan & India; Historic flooding in Phoenix, AZ; Continuing denialism on Fox 'News'; Hillary Clinton says global warming is both a crisis and an opportunity; Rand Paul isn't interested; PLUS: A win for the Lobster Boat Blockade, and climate action ... All that and more in today's Green News Report!

IN 'GREEN NEWS EXTRA' (see links below): CO2 levels in atmosphere rising at dramatically faster rate; The end of fracking is closer than you think; US quietly forwards tar sands pipelines without environmental review; 'Black fingers of death' could help fight climate change; Landfill workers told toxic coal ash waste 'safe enough to eat'; Big Oil's many new 'grassroots' front groups in California' The Ugly Denier: a real and present danger ... PLUS: Watching the world slip away: how kids are responding to climate change ... and much, MUCH more! ...

I still find it shocking that so many people don't believe what the UN, NASA, IPCC etc. say in their peer reviewed research. These honorable organizations have a history of telling truth to power, and corruption is not once named among those who work and serve mankind in these government supported organizations with little thanks from the blind masses who continue to pollute the earth with their cars and heaters. I am thankful that at least those natural disasters, before the scourge of AGW, served as omens to what would cause similar disasters now, and that is Global Warming. Climate deniers, get over it. This short pause in the warming trend only means that you better be thankful for the cold because it's only going to put off the time when you are warm, as in GLOBAL WARMING!