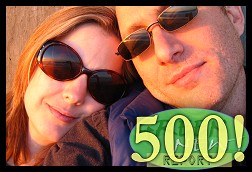 IN TODAY'S RADIO REPORT: It's our 500th episode of the Green News Report ...coincidentally on Earth Day! So, since every day is Earth Day for us, we thought we'd take a look back at the GNR's beginning and where it and climate coverage have gone since then. For better or worse. All that and more in today's very special Green News Report!

IN 'GREEN NEWS EXTRA' (see links below): Apple will now recycle your old products; Cowboys and Indians descend on Washington to Protest Keystone XL Pipeline; First Nations see no compromise on BC tar sands pipeline; Scientists discover way to generate solar power in the dark; Polluted Superfund site now home to solar panel farm; Environmental activist missing in Ecuador; Lead poisoning nightmare in Nigeria may be easing ... PLUS: BP Oil Spill Anniversary: 4 years later, the legacy of disaster in the Gulf ... and much, MUCH more! ...

Strange that science and religion agree on some things.