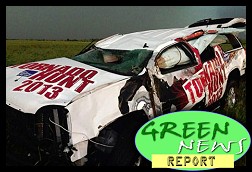 IN 'GREEN NEWS EXTRA' (see links below): Nevada breaks up with coal; Blame the news media for the public’s ignorance about the climate; Sobering sediments from Lake E; Climate change causing US wildfire season to last longer; Republicans decide socialism is awesome; Jellyfish surge in Mediterranean threatens environment ... PLUS: Alaska’s Bristol Bay mine project: Ground zero for the next big environmental fight?... and much, MUCH more! ...

The El Reno tornado was followed by another EF5 after only 11 days ... another record statistic.

Tornado danger to big cites is increasing, which if an EF5 could produce a record on steroids.