IN 'GREEN NEWS EXTRA' (see links below): An "attack on American cities" by the natural gas industry is freezing climate action in its tracks; National Audubon Society calls for 'Lights Out' after 'mass mortality' event of migratory birds; Babies are full of microplastics, new research shows; What climate change requires of economics; 14 percent of world's coral lost in a decade; Oil spills plague Venazuelan coast; Urban heat is getting more dangerous... PLUS: The Dimming of Planet Earth... and much, MUCH more! ...

With a long history of fossil fuel disasters up and down the California coastline, another one erupted over the weekend here in Southern California, as we discuss at the top of today's BradCast, along with the latest on the Congressional GOP Caucus threat to tank the U.S. economy by defaulting on trillions of dollars in debt they long ago agreed to incur.

First up, at least 126,000 gallons (approximately 3,000 barrels) of crude spilled into the ocean waters near Huntington Beach, California over the weekend, about 30 minutes south of Los Angeles. The full extent and cause of the damage is currently unknown as we went to air, but it includes a 13-square mile oil slick, dead birds and fish washing ashore, and sensitive ecological preserves along the coastline having been sullied by thick oil and tarballs.

The oil appears to have leaked from some part of a 17.5 mile pipeline which has extended, since the 1980s, from oil drilling and production platforms more than 3 miles offshore, in federal waters overseen by the U.S. Dept. of Interior. The pipeline is one of hundreds running up and down the oil rich CA coastline, where the state has banned new fossil fuel infrastructure, but where, as our guest notes today, the Trump Administration attempted to open up still more dangerous oil production over the past four years. The U.S. Coast Guard is now investigating whether a ship anchor dragging on the ocean floor may have caused the rupture.

We're joined on the program by LAURA DEEHAN, State Director of the non-profit Environment California, for the latest on the state's most recent fossil fuel disaster and what can and should be done about it moving forward.

"We need to get to the bottom of what's happened here," she tells us, adding: "I think our immediate concern is let's protect the wildlife, let's minimize the damage to our beaches and coastline as much as we can right now. But ultimately, of course, we're calling for a permanent end to this activity. Because clearly enough is enough."

Similar disasters have been killing wildlife and covering Southern California beaches in sticky, toxic tarballs for decades. The current spill has now shut down the tourism rich beaches of Huntington Beach, resulted in the cancellation of the third day of an air show on Sunday featuring the Blue Angeles and some 1.5 million spectators, and may similarly affect other beaches in the area from Long Beach to Newport Beach in Orange County in the coming days.

Deehan confirmed that the sensitive, 25-acre Talbert Marsh ecological reserve near Huntington Beach has now been sullied, threatening the lives of dozens of rare and endangered birds and other species. "We clearly need to end our dependence on oil to power our lives as fast as possible. So, we're calling for an end to drilling of the California coast," she explains. "Our coastline is too precious, it's too vulnerable, and we need to prevent anything like this from happening ever again."

So, who is to blame here? The private companies who run the platforms and pipelines (the Elly platform near where the leak occurred is run by a company named Beta Offshore, which is owned by another named Amplify Energy Corp.) Or is the state and/or federal government to blame? It took nearly 24 hours after residents smelled petroleum fumes and reported boats coming into docks with oiled hulls before a response was mounted and the pipeline, eventually, shut down. Dolphins and whales have reportedly been seen swimming through the oil slick ever since.

We discuss all of that and how the Biden Build Back Better agenda, supported by almost the entirety of the Congressional Democratic Caucus, might help to begin making all of these recurring disasters a thing of the past. Eventually. If Dems can overcome a handful of party obstructionists, which largely amount to two Senators, Joe Manchin from West Virginia coal country and Kyrsten Sinema of Arizona.

"When you think about the consequences of NOT ending our dependence on oil, I really think the costs to our society are so much greater," Deehan argues. "We can no longer afford to have these significant negative events, like a massive oil spill off our coast. There are economic impacts from that, too. The coastal communities, the people who want to be able to go surfing, the people who want to visit our Southern California beaches, the tourism industry, the fishing industry. All of these industries are going to lose a lot from this event."

As you might imagine, we'll be keeping our eye on that mess. But, next today, we head back to D.C. for the latest in the GOP's threat to tank the entire U.S. economy --- and the world's with it --- by obstructing Democratic efforts to lift the debt ceiling in order to continue paying off our already existing debt (including $8 trillion in deficit spending approved by Congress during the Trump Administration). The stakes are nothing less than the avoidance of a global fiscal calamity if the U.S. defaults on its debt for the first time in history, as of October 18. President Biden called out Republicans at the White House today for their brinkmanship, asking them to "get out of the way" if they won't help, and arguing that a "meteor is headed to crash into our economy" while the GOP plays "Russian Roulette" with it. Over the weekend, Democratic Senate Majority Whip Dick Durbin of Illinois called out Minority Leader Mitch McConnell for "playing games with a loaded weapon".

We open up the phones to discuss all of the above and more with listeners today... 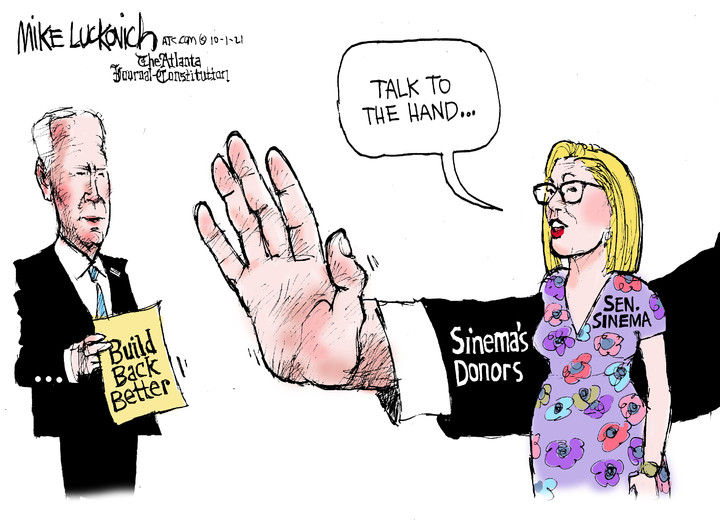 It's NICOLE SANDLER, back today to guest host the BradCast. If you didn't already know, I live in Florida (or as I refer to it, FloriDUH!). The biggest priority for me in the 2022 midterm elections is getting rid of the mini Trump Ron DeSantis. (Or as some of us who've been suffering under his rule refer to him, 'MoRon DeathSentence.')

I'm not sure who I'll vote for to replace him, but I'm looking at all the options. Right now, there are two declared Democrats in the race: Florida's Commission of Agriculture & Consumer Services NIKKI FRIED, and former Republican Governor, now Democratic Congressman CHARLIE CRIST, who represents Florida's 13th district.

They both appeared on my show over the last week or so. I thought today was a good opportunity to introduce them to you, as ousting DeSantis will benefit the entire nation.

What did you think? Impressed by either one or both? I'm curious to hear your thoughts. Weigh in in the comments below!

As for the week from hell that just ended, Brad will fill you in on the next show. All I have to say is, 'You go, Progressive Caucus!!!'...