What struck me the most were the buildings which house our seat of government. Old buildings. Massive buildings. Awe-inspiring columns in front. Quotes carved in stone. All representing huge monuments to our history as a nation. Made my heart swell with pride to know that generations ago the citizens who came before us believed that America was worth the anguish and danger and, yes, disruption to their normal lives to struggle against all odds to shape a nation in the best way they knew possible.

And what pissed me off the most, after my great sadness at the number of Iraqi and American lives lost because of this administration, was the fact that the corrupt criminals in power are dragging our wonderful, beautiful, capable-of-so-much-more-goodness country through the sewer. We can't blame our founding fathers. They did their best to protect us from what the future might hold. They couldn't know that all the checks and balances they carefully placed for our protection wouldn't be enough against the greedy corporations and politicians that were to come. It is us - who are to blame. For not keeping a closer watch on our inheritance, for assuming that it was already the best it could be, for not struggling always to make it better.

Which leaves us where we are now. With a broken, corrupt, unfixable system of governance which has enabled fascists to take power and pillage and pocket the spoils of our hard-earned pride, security, and money. We - just a leaderless revolution made up of patriots who will not give up our country - are all that stand in the way of the bastards dragging our noble nation down into the depths of hell.

Yes, we have been waging a revolution since 2000 when depraved evildoers staged a coup d'etat. A revolution in which each participant decided on their own to dig in their heels, frantically grab onto whatever they could find to do, and scream NO at the top of their lungs while watching in horror as the usurpers continued to drag us kicking and screaming ever closer to the precipice of annihilation.

But we have been fighting to rectify the symptoms of the problem (corruption, torture, lies, war crimes, election fraud, media deafness, environmental problems, campaign finance abuses, etc.) instead of fighting to change the system of governance that is the root of the problem. Once we institute a new system of governance, all the different symptoms will disappear along with the old system. We must declare that the American experiment of a Constitutional Republic has failed, take back our country, and bring forth a New America.

We can march on Washington again and stay until our demand to get our country back is met. Or we can wait around while the villains in power continue until there is nothing left of value to pillage and destroy (whether at that time there will be any of us alive and free enough to pick up the pieces is open to debate).

Those are our choices. Facts we have to face. There is no one to rescue us. We are on our own. We must right this wrong and put in place a new system of governance that protects us and future generations from this EVER happening again.

But history has placed you and me ... here ... now ... and it is up to us to take our great nation to the next level of democracy, equality, and freedom for its citizens.

We are the founding fathers of New America.

Well ... we are back home - working on the last few articles about our trip to DC. While I try to make coherent sense out of the notes I took, here's the last interview. Stan Goff's essay The Butterfly Effect --- Katrina and Occupation helped me to see that we are all living under occupation. 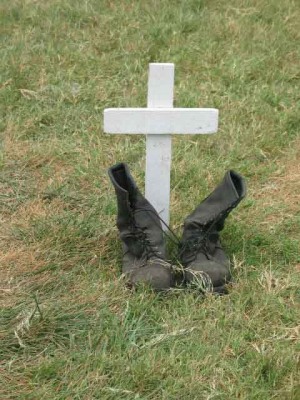 Yes ... dear BRAD BLOG readers, I have not failed you. I have subjected our fearless leader to my interview questions as well. Bless his heart, he answered them.

I love the way Larisa always says what needs to be said. Her column You Are an American really lays out in very clear concise terms who the real Americans are and what their duty is to our Constitution.

We're off to see our Representative today. While we're away - here's another interview for you. When I was desperately searching for something that would hold this administration accountable, I came across The March of the Madder'n Hells by Mark Drolette. 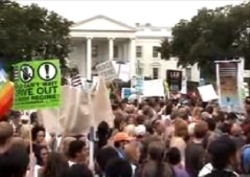 Video Journalist Dan Wilcox has provided BRAD BLOG with an exclusive video of the anti-war protests in DC on Saturday, September 24 at the White House. Gives a great sense of the crowd and its size...which none of the cable channels --- including C-SPAN! --- felt was newsworthy enough to broadcast! Includes exclusive footage of Cindy Sheehan and Jesse Jackson in the march.

BREAKING UPDATE (9/26/05): AP reports Sheehan and about 50 others arrested today in front of White House!

WE HAVE THE POWER!

It's one thing to read the words, or hear the words, but to FEEL the words is unbelievable!

On Saturday we FELT the power WE have. When enough of US get together, WE make the rules.

Before the march while walking to the Washington Monument there were so many of US flooding the streets WE didn't have to obey traffic lights. Cars didn't matter. WE literally OWNED the ground WE walked on!

If WE decide to, WE can become a “rainbow river” (© Dan

that at any moment can choose to flow into Washington DC and take OUR White House back.

Only 4 hours of sleep last night, but we're rarin' to go again! So here is another interview until we can get back to fill you in on our day. I was trying to get up the courage to come to DC and Charles Sullivan's article "Nation of Fools" helped push me that last little bit. Maybe it will help inspire you to join US for the next show of strength.

{apologies from Winter Patriot: Katrina sent us this piece last night but we didn't manage to get it posted right away ... but better late than never ... here's Katrina:}

Wow! Hell of a day. Crowds of protesters. How many? We tried to estimate all day. Definitely more than 100,000. But once surrounded by that number it is difficult to count more. Whoever was in the helicopter continuously circling overhead would know - but I doubt they will tell. Just all day ... people as far as the eye can see.

The March started with a one hour shuffle of 100 feet. Then finally we started moving. People packed in the street in front, behind, and around any corners we came to - a giant river of people. At a corner we met the front of the March coming back to pass us making one giant loop. Then a row of police guarding the Treasury building reminding all of us that money was all they care about.

Well ... we are off to raise hell and demand an immediate end to the war! While we are away documenting this massive show of strength by patriotic like-minded Americans, I leave you with this interview with Chris Floyd - author of one of the articles that opened my eyes to the need to stop them and hold them accountable NOW.

( 7 so far... )
Article Categories: (Uncategorized)
Tilting at Windmills
No More Time: Heading to DC
Maybe this event will turn the tide
By Katrina Wilcox on 9/23/2005 7:41pm PT

So ... my fellow warriors on the path to truth, accountability, and justice ... are you tired of begging yet? Have you signed enough petitions, written enough letters, called your representatives enough times to finally realize that none of that is really going to do any good? Are you bone-weary, frustrated, and just plain pissed that your endless pleading continues to fall on deaf ears? Yeah ... me, too.

You don't need to be told that we live in insane times. We have definitely fallen down the rabbit hole. And while we are reeling ... trying to gain our footing, trying to make sense out of it all, trying desperately to do something to make it stop - they continue killing. Every day, every moment, every second ... they are killing more in Iraq and now in America. We are out of time. No more time for trying to convince our representatives to finally do the right thing. No more time to wait for the next rigged election. No more time to wait for that hopeful someday of completed investigations. We must stand up and stop them now.

But how? Has this sinking feeling been shadowing your actions? That maybe they can never be stopped by working within the system. That using the rules laid out by the system to affect change from within the system will never work. First ... the system is corrupt, rotten, and broken. Second ... they keep breaking all the rules while at the same time demanding that we follow them. Third ... no system of power ever has built into it any way for anyone to take the power away from those who hold it. Ever.

Maybe the only sure fire way to get this administration of criminals and their enablers to quit ignoring us is for a couple million of us to plunk down around the White House and Congress and shut down the government ... till we get our country back. Maybe you have a better idea. If so, please speak up.

In the meantime, my husband and I who have never protested before are heading to DC with video equipment and digital camera, protest signs and protest shirts, rock solid determination and stubbornness to participate in what we hope will be the biggest gathering ever. Maybe this event will turn the tide. It wasn't an easy decision to go. But these articles convinced me that I had a duty as an American:

Also ... One other thing made me damn sure I should go to DC. What we all saw with our own eyes. What they did to Americans on the Gulf Coast in the aftermath of Hurricane Katrina. They made it crystal, blood-chillingly clear that they have declared war on all of us. From now on - it is either them or us - down to our last dying breath. Bastards.