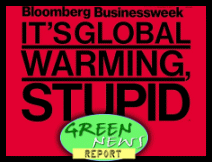 IN TODAY'S RADIO REPORT: With Hurricane Sandy recovery underway, Bloomberg endorses Obama, Romney is heckled, and the impacts of climate change finally begin to dawn on corporate media and public officials; PLUS: Planning ahead for a climate changed future ... All that and more in today's Green News Report!

IN 'GREEN NEWS EXTRA' (see links below): CIA's Climate Change Security Report Delayed Due To Hurricane Sandy; Winter Storm May Hit In Early November, Possibly On Election Day; Energy company CEO: Why do we have to talk about climate change today?; Australia Rejects Calls From The Fossil Fuel Industry To Roll Back 20 Percent Renewable Energy Target; Exxon And Shell Earn $54 Billion So Far In 2012, After Taking $800 Million In Annual Tax Breaks; KFC UK will no longer source from Asia Pulp & Paper ... PLUS: The Onion: Nation Suddenly Realizes This Just Going To Be A Thing That Happens From Now On ... and much, MUCH more! ...

The fifth graders know how wrong the meme "you can't tell if one weather event is related to climate change or not" is, because they get it.

In his editorial endorsement of the President, Michael Bloomberg cited this difference between Obama and Romney:

One sees climate change as an urgent problem that threatens our planet; one does not. I want our president to place scientific evidence and risk management above electoral politics.

Need spam cleanup on #5... a true adherent of disaster capitalism.

Ugh, thanks, Zapkitty! Although deleting that spammer makes you comment #5, but we're not deleting you!

In Soviet Russia, comments delete you!

I know Sandy shows what our insane fossil fuel dependency is doing above ground, but here's how they are hiding the impacts of their quick fix of fracking to our water underground:

Everyone with a green agenda take note!

Welcome to ClimateViewer 3D
The Wild World of Science Non-Fiction

Keep up the good work!

A recent survey indicates we are getting through to the public:


68% of Americans see climate change as a "serious problem," according to a poll released on Friday.

The poll was conducted by Rasmussen on Monday, the day before the U.S. presidential election.

Of the 1,000 likely voters surveyed, 68% said they thought climate change is a somewhat serious or very serious problem. 30% of respondents said it was not a serious problem.