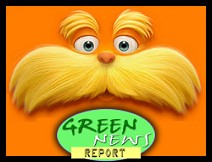 IN TODAY'S RADIO REPORT: Fox 'News' freaks out over The Lorax; Transcanada moves forward on Keystone XL pipeline, and moves against property owners; BP Oil Spill trial on hold; Using the courts to halt air pollution rules; PLUS: Game-changing battery breakthrough for electric cars ... All that and more in today's Green News Report!

"As climate-change science moves in one direction, Republicans in Congress are moving in another. Why?"

Actually, they are all, we are all, moving in the same literally Earth shaking direction ... even as we think it is a political problem with an economic solution.

That shaking is not a matter of votes.

Interest how every major media outlet covered (and often misreported) Solyndra's failure but so few so much as mentioned Envia's success.

For those who advocate plug-in EVs, the development of a relatively inexpensive battery with a 300 mile range is fantastic news.

Has anybody here ever heard of these folks?

Yes, Ancient --- the folks at Rocky Mountain Institute have worked for years to transition the nation away from polluting fossil fuels. They are a legit organization that promotes specific policy approaches for the environment & clean energy industry that are mostly in line with the other major enviro advocacy groups.

"The world is likely to build so many fossil-fuelled power stations, energy-guzzling factories and inefficient buildings in the next five years that it will become impossible to hold global warming to safe levels, and the last chance of combating dangerous climate change will be "lost for ever". Is it all about the money?