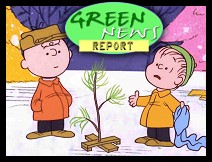 IN TODAY'S RADIO REPORT: The Planet strikes back in 2010 --- and packs a winter wallop; More Wikileaks: sneaky moves on biotech crops and climate negotiations; Evangelical Christianity's War on Environmentalists begins; PLUS: Which is better --- real or fake? Christmas trees, we're talking about Christmas trees! .... All that and more in today's Green News Report!

Earthquakes, heat waves, floods, volcanoes, super typhoons, blizzards, landslides and droughts killed at least a quarter million people in 2010 — the deadliest year in more than a generation. More people were killed worldwide by natural disasters this year than have been killed in terrorism attacks in the past 40 years combined.

"It just seemed like it was back-to-back and it came in waves," said Craig Fugate, who heads the U.S. Federal Emergency Management Agency. It handled a record number of disasters in 2010.

"The term '100-year event' really lost its meaning this year."

And we have ourselves to blame most of the time, scientists and disaster experts say. Even though many catastrophes have the ring of random chance, the hand of man made this a particularly deadly, costly, extreme and weird year for everything from wild weather to earthquakes.

In a last-minute lame-duck victory for conservationists, the House passed Tuesday a bill that puts new restrictions on shark finning in U.S. waters.
...
The legislation... closes a number of loopholes in the United States’s current ban on shark finning.

Conservationists have been raising red flags for years about shark finning, in which valuable shark fins are removed and sold, noting significant declines in shark populations that could have broad impacts on ocean ecosystems.