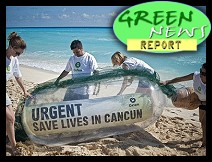 IN TODAY'S RADIO REPORT: After failure in Copenhagen, the next climate summit begins in Cancun, Mexico; Bye-bye Bluefin Tuna (Sorry, Charlie!)... PLUS: The Earth, now in 3D ... All that and more in today's Green News Report!

CopenCun: That's what World Resources Institute president Jonathan Lash has called the upcoming meetings, because Cancun first needs to deal with the hangover from the Copenhagen Accord, signed at the last-minute last December. The Accord was drafted as a way to sidestep the problem of dividing up emissions reductions, which has plagued international climate negotiations for nearly two decades....[MORE]

« PREVIOUS STORY "Toon of the Moment: 'Magic of the Marketplace'..."
» Go to The BRAD BLOG front page «
"Tea Party Nation President: 'Restrict Voting to Property Owners Only'" NEXT STORY »

NEWS EDITORS ARE GUILTY OF LEADING US TO A FALSE WAR OF CLIMATE CHANGE.
The new DENIER is a believer who still thinks voter support will vote YES to taxing the air to make the weather colder and lower the seas and agree to personal lifestyle sacrifice to SAVE THE PLANET. You faded doomers are now jokes for history. How many climate scientists does it take to change a light bulb? None, but they DO have consensus, that it WILL change?
The failed theory of Climate Change was a business for the greedy, and intellectual fodder for the ignorants and ideologues and is now laughingly known to history as the era of environMENTAL Disco science.
Meanwhile, the UN had allowed carbon trading to trump 3rd world fresh water relief, starvation rescue and 3rd world education for just over 25 years of climate control instead of population control. BIG MISTAKE!
History blames Climate Change's longevity and it’s resulting needless and costly panic squarely on the lazy copy and paste unconscionable news editors. Climate Change was an Iraq War of lies and WMD’s to the reputations and respect for science, journalism and neocon-liberals.

Well, I'll thank you, at least, for offering a fresh denialist argument! Can't tell you how sick I am of the long-ago-debunked ones we usually get around here. Of course, your charges don't have much more substance --- or evidence, or logic --- than the usual ones we get, but at least they were more original! A "breath of fresh air", if you'll forgive the pun. So for that, I thank you!

Um, wow... Meme Mine. You sure did pack a whole lotta words in there. It appears that you're trying to use the "It's a global conspiracy" argument. Please reference some actual evidence --- primary scientific literature, for example --- to back up your position, since it would appear from your comment that you haven't gone out and gathered the field data yourself.

For a start, maybe you'd like to present your evidence as to why this is incorrect:

CO2 and Temperature over the Last 420,000 Years: Present and Projected Climate Changes in Perspective

Please feel free to share your scientific evidence, with links so our readers can verify for themselves. Thanks.