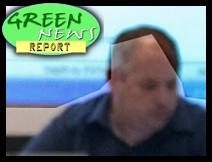 IN TODAY'S RADIO REPORT: Confirmed yet again: 2010 hottest year on record so far; Fossil fuel death toll still rising ... PLUS: The three-month mark of the BP Oil Disaster in the Gulf, and all the oily mess that goes with it ... All that and more in today's Green News Report!

Maddow's Soprano's clip actually reminds me of the search for a 5th Circuit Court judge and the district court in New Orleans who has not been "contaminated" by the oil cartel.

Sounds like Tony Soprano's lawyers have a higher ethical standard for recusal than the likes of Judge Martin Feldman.

I've chased the news and politics for a few years now.
Nov 30-Dec 1 last year I reached the end of my rope on the Iran scam. By that I mean I had followed the back-and-forth between the USA and Iran and picked up with some calls from offside that all was not right with the media presentation of 'the way things are.It didn't matter what CIA or IAEA said or how many promises were made about giving Iran a new deal and a fair shake...nothing changed in the position of hammering Iran over their nuclear program...just like Iraq. We know how that worked out. Zilch. Nada.
And it finally jelled that it was stupid. What nation in their right mind is going to undertake a program proving they have no inconvenient surprises for invaders unless they are vehement in their conviction that nuclear arms must be controlled ?
Makes no sense. Worse, they are getting fuel and tech from a neighbour who has proved in the past it has no sense of ha ha about nuclear arms in their back yard. Cuban Missile Crisis is a phrase that usually rings most peoples' chimes.
So I ran a search on the parameters "the U.S. Suspects", playing with it in different engines to see what shook loose.

A weird one showed up. Dec 1 at My Opera, and Dec 4 at Blogger, Opit's LinkFest! was running articles on the damndest strange hoax I had ever seen. And I was finding confirmation from online and correspondence from a science writer that science itself was being scammed. Not that what Cheney had done to parks and the environment didn't already stink to high Heaven. Staff there had complained of errant b.s. Even the Smithsonian was ringing with stories of false and spun reporting of science stories.
So I guess I was prepped a bit to remember stories from the 70's that flat contradicted the media's "Conventional Wisdom" about Global Warming.
Don't get me wrong. Climate Change is something I would have expected after reading stories years ago about how current climate is a historical anomaly in being moderate. If your baseline is atypical, change is almost guaranteed.
Not that it would be the first time.
Remember political framing ? Strawman Argumentation and Poisoning the Well Argumentation ; debater's tricks of False Logic ?
What else would you call a deal where if you disagree with the story you are told you are a 'Denier' ? Couldn't run a better frameup if one was discussing Pagans by calling them some made up or inappropriate word as a pejorative. Atheism and Agnosticism are religious comparative terms for those outside the narrow channel of Theocracy.
Calling umpteen tribes 'Indians' as if they were one people works wonders for promoting ignorance. The same noise is promoted today in Afghanistan.

That's what we have here. Except, like politics, where you have two war parties offering ' a choice', you get two politically motivated pressure groups engaging in a public melee sure to confuse, prejudice and disarm intelligent evaluation.
I haven't seen a better job done on UFO's.

Anyway. I collected a bunch of articles and sources to muse over the mess. A lot of it is very convincing. And then silly stuff appears, like this atmospheric collapse being exaggerated by the cooling effect of carbon dioxide in the atmosphere. Say what ?

Or the list of factors and unknown effects that buggers what would be an extremely complicated model even without acknowledging little things like nobody knows how to deal with albedo changes from clouds and heat transfer from the major mechanism doing so : water circulation in liquid and air in various vectors and states. Simplifying that so you can calculate it is not something you can prove works for making projections in any timeline we're likely to employ, let alone validating the computational model.
It gets worse. It's a real brouhaha in fact, including the fact that money is perverting testimony : and that's something alleged by the 'establishment' itself...as if that was a one-sided phenomenon.

opitslinkfest.blogspot.com is where you will find 'Climate in Contention' in the Topical Index. And no : I did not collect stories promoting one view. It's enough to start to appreciate that a staged show is in progress.

Well, first off, Opit, you'll be glad to learn that the 'global cooling' story from the 70s that is constantly recycled by deniers is actually a myth:

The supposed "global cooling" consensus among scientists in the 1970s — frequently offered by global-warming skeptics as proof that climatologists can't make up their minds — is a myth, according to a survey of the scientific literature of the era.
...
Thomas Peterson of the National Climatic Data Center surveyed dozens of peer-reviewed scientific articles from 1965 to 1979 and found that only seven supported global cooling, while 44 predicted warming. Peterson says 20 others were neutral in their assessments of climate trends.

The study reports, "There was no scientific consensus in the 1970s that the Earth was headed into an imminent ice age.

Unlike today, where climate scientists and earth systems scientists are nearly unanimous. So you can drop that one.

Except, like politics, where you have two war parties offering ' a choice', you get two politically motivated pressure groups engaging in a public melee sure to confuse, prejudice and disarm intelligent evaluation.

No, only one of the parties has the objective scientific fact to back it up. The earth's atmosphere is warming far, far faster than at any time in geologic history --- even the "skeptic" scientists like Lindzen don't dispute that fact --- only how much humans contribute to it. What you're talking about is the policy response to the scientific evidence of climate change --- "politically motivated pressure groups" can't change the objective scientific data, only challenge the interpretation of that data and the government's policy response to it. With billions of dollars in profits for the fossil fuel industry threatened by any policy change away from their products (trillions in profits if you count the manufacturing, industrial, and agricultural sectors), there is huge incentive to keep things just as they are, especially when those profits depend on being allowed to pollute for free, forever. Spending millions to protect your billions works.

Again, go to SkepticalScience.com and you'll find a treasure trove of actual science upon which to base your evaluation.