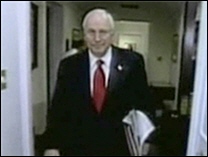 The Special Prosecutor investigating the outing of CIA officer, Valerie Plame-Wilson, has indicated in a court filing that Vice President Cheney is likely to be a witness in the Libby trial.

The New York Times quotes Fitzgerald writing, "Contrary to defendant's assertion, the government has not represented that it does not intend to call the vice president as a witness at trial." (see: Muckraker). Cheney's testimony is expected to reflect the state of mind in the Office of the Vice President during the organized attack on Joe Wilson's credibility and the outing of Plame-Wilson. The testimony will likely show that Libby had motive to leak selective information to reporters to smear Wilson and bolster the Administration's justification for war on Iraq.

A "conspiracy within the Vice President's office"? Absurd. How could that BE? Everybody knows that conspiracies are only engaged in by leftist kooks!

You are so correct... It's a proven fact that conspiracies are just fantasies of left-wing internet crazies.

' “It must be hard to put the U.S. detention center at Guantanamo Bay Cuba, in a positive light, following recent detainee suicide attempts and the United Nations Committee Against Torture's recommendation that the camp be closed, but that's what the Pentagon is trying to do. According to US News & World Report,

"Officials from the Joint Chiefs of Staff Detainee Affairs Section have worked up a new briefing and made presentations in recent months to some 3,000 people, including media representatives and members of Congress, stressing the strategic value of detainees at the prison camp." The briefing touts the camp's "decent food, healthcare, and literacy training for the inmates. Notwithstanding allegations of psychological and physical torture, officials say the biggest threats faced by many detainees are ... frequent sports injuries on Gitmo basketball courts...." '

I bet they get two kinds of fruit, too!

The Enron officials, just convicted, can now be added to the long list preznit blush will pardon on his last day in office.

They will deny it during the elections, and flip flop at the last minute.

Safavian, Rove, and Libby will be on the list ...

Strategic value of having "dangerous terrorists" at Gitmo. Wasn't it reported earlier this week that the "high value" detainees aren't there and never were there? Somebody who was going over the list of prisoners released last week latched on to this. So how valuable can Gitmo be? And other Gitmo defenders were claiming the UN has no business squawking about the Geneva Conventions because the folks imprisoned at Gitmo are "enemy combatants" not POW's and hundreds of years of war-making precedent draws a distinction. The "war" on terror isn't a war at all. Neither was the "war" on poverty or the "war" on drugs. Now, if you start imprisoning all the enemy combatants of the war on poverty, who would go to Gitmo? The porr? The wealthy?

Can someone start manufacturing clay pigions with Cheney's face on it with a twist. Produce the shotgun target material in the US.

Wait until the day comes when they investigate who was running Norad and war games on 9/11. Pardon that Bushit.

I believe there's a requirement that all witnesses must be awake when they testify. That could become a problem.

Cheney is the antichrist. If he puts his hand on a Bible there will be a sizzling sound and screams of pain. If they summon the dark prince from his evil lair to testify to the truth "so help me God" he will melt.

For Cheney to have to tell the truth could be his undoing. I am worried.

Imagine the stress it would cause, to enter an entirely new world without spin, deceit, flagrant disregard for reality, addiction to fiction, and a strong aversion to reality.

I think it could be dangerous for the odd fella, and they should have an ambulance at the ready. The truth would be such a shock ... and if he hears himself uttering truth it could cause a complete loss of self perception that he could go comatose.

I know I would not want to be cross examined by Fitz if I was Cheney ... it would be like the early days when he tried to lie to momma ... who immediately got a can of whup ass out and fed it to him on a stick!

A nice video synopsis of the bu$$hco white house
involvement in the Plame/Wilson affair,...

To add to your comment below, there ought to be a requirement (laws) that all must testify 'alone' and all must...no matter who they are 'swear in'. To not swear in, like not have paper receipts of votes proves ones desire to lie and fraud, simple as that!

I believe there's a requirement that all witnesses must be awake when they testify. That could become a problem.

As to the Cheney testimony, (UNDER OATH THIS TIME)! When, When, When...

he is sniffing down the Plame/Wilson,.. and

From 'Secrecy News:From the Federation of American Scientists Project on Government Secrecy'
(via RawStory)
(sorry I still suck at links)

"...As the Bush administration has dramatically accelerated the classification of information as "top secret" or "confidential," one office is refusing to report on its annual activity in classifying documents: the office of Vice President Dick Cheney.

A standing executive order, strengthened by President Bush in 2003, requires all agencies and "any other entity within the executive branch" to provide an annual accounting of their classification of documents...
...but Cheney continues to insist he is exempt.

Explaining why the vice president has withheld even a tally of his office's secrecy when such offices as the National Security Council routinely report theirs, a spokeswoman said Cheney is "not under any duty" to provide it..."

..."This matter has been carefully reviewed," said spokeswoman Lea Anne McBride. "It has been determined that the reporting requirement does not apply to the office of the vice president."...

"..."The government is undergoing a mutation in which we are gradually shifting into another kind of government in which executive authority is supreme and significantly unchecked." "

If he has to testify "under oath" (we're supposed to believe he will suddenly somehow be imbued with respect for such an oath?) I suggest they try whatever was done to Jim Carrey in Liar Liar (wow, how apt is THAT title)
Or sodium pentothal maybe. That would be sweet.

Use the "CLICK HERE" just above where you type in your messages. It will build an URL with a link to your story.

Thanks, Dredd, I will try it again...

Oh, it DID work. It's a bit confusing (for the likes of me) when the actual link only appears after you hit ''Preview', heh. Thanks!

from the article:
"...To get to the bottom of this mess, New York Congressman Maurice Hinchey just introduced a measure to force President Bush, Secretary Rumsfeld and Attorney General Gonzales to turn over their documents regarding the investigation, including their telephone and email records, logs and calendars and records of internal discussions. Those are the same kind of personal communications that the NSA is monitoring to spy on millions of Americans, so it should be interesting to see how Bush and his appointees criticize or resist this request..."

I so hate to say this, but every day I have less & less hope that ANYTHING we try to do to rein in the horror of this administration will penetrate this evil, destructive web they continue to weave. I can only hope to God I'm wrong.

Old Turk,
Wow, I love that karl caricature! Looks just like him.

The motion cartoons are done by a Bill Mitchell,..

a real good library of his work,.. link follows.

it adds a dimension of more humor.

pushed the wrong button and it got posted.

I am new to that HTML Editor,.. I hope Brad is not

upset with that billboard.

Check out the other Mitchell stuff,.. real funny.

Old Turk,
Thanks for that link...those are some GREAT toons!! I like the one where you get to play God with pat robertson.

But each one is better than the last... Great stuff!

This helpful list of talking points --from http://freewayblogger.blogspot.com/ --was titled

Stephen Colbert was not funny.
Helen Thomas is old and batty.
Mexicans are taking our jobs.
Iraq sent its WMDs to Syria.
Democrats don't want to wiretap terrorists.
Joe Wilson admitted that Valerie Plame wasn't covert.
Karl Rove has a faulty memory.
Scooter Libby has a faulty memory.
Tom DeLay is like Jesus Christ.
No one could have anticipated that the levees would be breached.
We do not torture.
There is no global warming.
There is global warming, but humans didn't cause it.
John F. Kerry is a flip-flopper.
George W. Bush is a decider.
John McCain is a straight-shooter.
Dick Cheney is a sober shooter.
Nobody at the White House knows Jack Abramoff.
The economy is great.
Evolution isn't supported by the facts.
We've turned a corner in Iraq.
There's a war on Christmas.
There's a war on Easter.
There's no civil war in Iraq.
Up is down.
Black is white.

Joan : Enjoy,.. compliment Mitchell,.. there is a
place to say,.. good job. He lives in the Northern Rocky Mountain area,.. then digital messages
his cartoons to his vendees. Away from the rat-race but very politically astute.

Karl Rove will not be charged!!!

You people kept wishing but you were really fishing!

It was Larry Bergman here who didn't know who Karl Rove was! He had to ask on another blog thread and he was answered by Agent99. I guess now you know, Larry! HAHAHAHA!!!!!