CNN reported on the Carnival Cruise contract this morning. View the report in Streaming Real Media or Windows Media.

If you missed Michael Brown's "testimony of shame" yesterday, Crooks and Liars has a clip. Think Progress has determined that Brown lied under oath while smearing Governor Blanco. 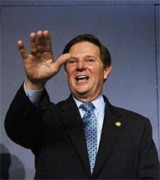 The FEMA/Brownie scandals seem to be business-as-usual for the beleaguered president and Republican leadership. John Conyers wonders if the Wheels are Falling Off the GOP. Reports that DeLay may be indicted soon (AP, Americablog, Austin paper) along with recent revelations that Jack Abramoff may be involved in a gangland style murder must be troubling for the White House.

In addition, Patrick Fitzgerald's investigation is winding down and Administration insiders claim that the White House is sweating. Dan Froomkin of the Washington Post reports:


And it turns out that the Valerie Plame case is indeed hanging over the White House like a pall.

VandeHei and Baker write: "The federal CIA leak investigation, which has forced Deputy White House Chief of Staff Karl Rove and others to testify before a grand jury, seemed to distract officials and left a general feeling of unease, two aides said. Aides were calling reporters to find out what was happening with Rove and the investigation. 'Nobody knows what's going to happen with the probe,' one senior aide said."

As a cruise ship veteran, I can assure everyone that the real differential is much greater than 2:1.

A charge of $599 for a seven-day cruise includes the cost of fuel, which obviously isn't a factor when a ship is in port. It includes the cost of onboard entertainment; as far as I know there were no Broadway troupes performing in New Orleans. It includes the salaries of experienced naval officers and seamen, engineers and electricians, laundry crew, chefs, stewards, and maintenance people onboard and onshore.

Absent these imputed costs a 7-day cruise would probably cost less than half of $599. The actual overcharge ratio here is probably at least 5:1.

On a conceptually related note, has anyone else caught the Dylan documentary on PBS? It is just terrific and reminded me how current classics like Masters of War are to current affairs (lyrics here: http://www.hairytruth.blogspot.com). Really very chilling.

Brown must have taken a cut on this deal too!

This whole business with Carnival is a gross mismanagement of US Taxpayers dollars. Rather than point out the obvious, "our taxpayer dollars are often spent unwisely". I want to touch on the business tactics of the company receiving this sweetheart deal....Carnival Cruise Lines.
I'd booked a 7-day cruise to the Mexican Riviera on Carnival's Elation. After Katrina hit the Gulf Coast, FEMA struck their deal with Carnival to secure the ships Estacy, Holiday & Sensation. This was obviously going to change the travel plans of a number of folks who'd booked cruises on those ships......well kinda. Carnival made a business decision to move the passengers on these ships to the Elation. Remember the Elation wasn't involved in the FEMA dealings. Passengers on the affected ships were offered their choice of a complete refund or the identical accommodations on the Elation for the same price. Nobody hurt by this decision....but.
Now what happened to the passengers who were booked on the Elation to cruise the Mexican Riviera for 7-days? I was contacted by Carnival and informed that they were moving the "Carnival Conquest' in from New Orleans to offer a 7-day cruise to Mexico. That sounded fine to me until I was told I could accept a cabin on the bottom floor of the ship and pay an additional $200/cabin, or pay $1000+ to secure the comparable accommodations that I'd booked on the "Elation". I told the Carnival Agent(s) that this was unacceptable. Over the following 3-days I was told by at least 3 Agent that they were shocked that Carnival Management decided not to price protect the folks that they'd decided to cancel. I spoke to Carnival's "Assistant to the V.P. of Sales Relations" and was basically told "where to go"!
Carnival is claiming the FEMA deal isn't very profitable to them.....something doesn't add up. Carnival Management has used the FEMA deal to take advantage of the passengers who have been affected by Carnival Management's decision. They have shown zero willingness to work with the affected passengers who now most likely have not only cruise arrangements, but also air travel and hotel reservations to sort out. All Carnival needed to do was price protect the folks affected by THEIR DECISION!
I've booked a Royal Caribbean cruise out of Miami for the same dates and have incurred an additional cost of approximately $1100 between cruise & airline tickets to do so. After the job Carnival Cruise Lines did on my family and U.S. Taxpayers, I'll never consider spending a penny with them.

What a rip off! You can't charge per person. The rooms are all different values, size, level, balcony, etc. How many will they squeeze into each cabin?

What we need to do here is FUCK Carnival Cruise! Let's tell them that we will FUCK THEM LIKE THEY'VE NEVER BEEN FUCKED BEFORE. I'm serious, take every opportunity you can to make these cocksuckers fucking stocks tank. Go to your local tourist agency and rail about this to them. Make a scene, try to do it when there's alot of customers in the room. Don't worry about hurting the feelings of the people that work there unless they say that the company policy is to stop stealing from the American people. Get in their faces. ANGER WORKS IN AMERICA, and it's okay to use it if the facts are on your side in this case, and besides, AREN'T YOU TIRED OF LOSING? Get leafleats, tell strangers, get the CEO'S name out, make critical mass happen, and THEN??? Call those pigs at Carnival and tell them that THIS IS WHAT HAPPENS WHEN YOU FUCK A STRANGER IN THE ASS!!
You got to be a spirit, you can't be no ghost.

Yoda..
Calm down you should.
I see you're a Bulworth fan, lol! Me too. Isn't Warren thinking of running against Ahnold? That'd almost be worth moving to California for.

Carnival Cruise Line; Give us our money back NOW!

If Carnival Cruise Lines is attempting to base its charge for housing hurricane refugees on its AVERAGE cruise fare, that's outright fraud. If the minimum fare for an inside cabin on a lower deck is $599 (which includes the imputed costs of fuel and entertainment, and neither applies here), their highest fare for a penthouse suite on a top deck is probably $4,000 or $5,000.

But these ritzy suites are priced according to their views and the luxuries provided (including a special dining room with gourmet food). They're larger, but not six or seven times larger as the price differential would suggest. In port, a luxury suite is only marginally nicer than an inside cabin.

The price charged by Carnival per week should have been based on the minimum fare for a 7-day cruise, MINUS IMPUTED FUEL AND ENTERTAIMENT COSTS. It's a complete ripoff.

Maybe Carnival should be ashamed of exploiting a crisis... but, companies like that usually try. The difference here is, they are getting away with it because there is no accountability.

This Administration loves to regulate everything, (talk about big government). But, they don't actually require their own to have action plans, critical paths, follow up critique. It is simply bad management from the top down.

If only there were a way of saying to an Administration this bad at everything, "get it together now or you're fired".

But, America let it's guard down and now we are stuck in this almost hopeless mess.

How many more things can be wrecked by mismanagement before W goes?

Seriously, I've been on lot's of cruises and Carnival sucks. The food is nasty and they have no decent entertainment and they nickel and dime you to death for things like BINGO because there's nothing else to do. And now they want to rip off the guvmint? No surprise when you consider that Kathie Lee "Sweatshop" Gifford used to be their spokesperson.

Damn, and I had a "free" criuse coming. Boycott.

Was Brownie still the FEMA Director when this sweetheart deal went through?

Relax moron. You fail to take into consideration the fact that Carnival also makes revenue off of their bars, pictures of cruise passingers, tips to offset porters, waiters, and cabin stewards and the rest of the employees that Carnival IS STILL PAYING, even though the ships are not being used.

Lets also inclued the fact that the casino is not operating, nor are they providing tours that the passingers pay for.

If this was such a great deal, other cruise lines would be making waves (pun intended) about this setup.

You need to take into consideration all revenue producing methods the cruise industry uses. Paying to be in a cabin is just one out of many, many more ways to produce revenue.

Next time put your brain into gear before putting your mouth into motion.

You act like a republican? Try holding the republican president to some kind of standard. Stupidity is a bad way for a US president to go through office.

Oh yea! I didn't see your web site about Haliburton!

First of all half of you dont now JACK SHIT about a cruise ship. First that moron says that people that stay in suites has their own dining room and gormet food, well Carnival does not have diffrent class, all of the guests are treated the same. And for the record, the cost of the guest paying for the cabin, is just a very very small fraction of what it cost to operate a vessel. It is a shame that people always try to find a problem when someone or a company is helping 3 STATES house their people when the area was devestated. Why didn't RCCL or NCL syep up to the plate. FACT, they don't have the respect or the BALLS to take 3 cruise ships out of service, refund passengers booked on those ships for at least 3 months, and give shipboard credits. But, all of you think Carnival is making a profit. Please get a clue, really. You have no idea, just try to run the country for one minute and pat attention to what your paid to do, which most of teh time for politicians, is nothing.......

This blog posting is great. Your views are very true. Everyone should start thinking as you are doing.

This blog posting was of great use in learning new information and also in exchanging our views. Thank you.
Chris Scanlon
http://www.carnivalcruiselinesrated.com

You know what really is the kick in the groin, the money taxpayers paid doesn't go back to the US Citizens, it went to third world country's, to support their families. Carnival, you named your cruise line correctly, a real three ring circus !!!!!!!!!