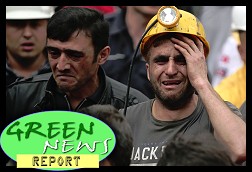 In Africa, Asia, and the Middle East, we are already seeing how the impacts of extreme weather, such as prolonged drought and flooding - and resulting food shortages, desertification, population dislocation and mass migration, and sea level rise - are posing security challenges to these regions' governments.

All tis news just goes to show that climate change deniers like Rand Paul and Marco Rubio, et. al., should one day be condemned for criminal actions in preventing --- denying --- legislation to help mitigate problems associated with climate change.

The Conservative "limited government" stance is pure bullshit and antithetical to America's health and well being for it moves money away from the public sector --- which would keep us all safe and healthy --- and into the corporate sector, i.e. rich people, which is all inherited wealth and not worked for wealth, who go on to accumulate wealth while not trickling down wealth in the form of wage increases.

Conservatives look like are fools, but are actually criminals.

And thanks to Des too!

Here is what some locations where those politicians live are going to look like.

B&D you really sound like you known what you are doing ....Congrats

How you been dear friend?

Thanks, BH! As you know, sounding like one knows what they are doing is pretty much half the battle.

Sometimes we forget some of the highly developed civilizations that existed before fossil fuel addiction (Civilizations Like Our Own Without Oil).

An article at Think Progress discusses how India could provide power to 400M citizens by going solar. That bodes well for the planet. If India could make the move to Solar it would be a great step toward world peace (without nukes).
Going solar reduces the effects of climate change which the defense department has reported for years how destabilizing and confrontational the future will be as countries fight for ever decreasing resources as seas rise, glaciers melt and the usual sources of water and food become more sporadic.
It also reduces the chance of a nuclear war. As countries become more reliant on solar power, they will be less likely to want to be involved in a war that would result in a nuclear winter. The aftermath of a nuclear war (besides the radiation) would be even more difficult to survive if enough particulate matter is elevated into the stratosphere that is blocks out the life/energy giving light of the sun.

Good points, Adam. We cover the pledge made by India's new prime minister in our next GNR. Be sure to check out the links in the post, as there is some question as to whether it is more than just another pledge among many that won't be met. Here's hoping he makes it work.