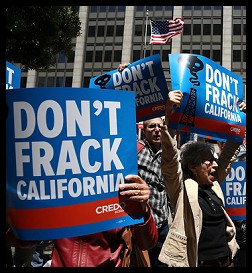 In a letter this week, twenty of the nation’s top climate scientists urged Gov. Jerry Brown (D-CA) to impose an immediate moratorium on the use of hydraulic fracturing (aka "fracking") as a means for extracting oil and natural gas in the Golden State.

In the letter, the scientists warn Brown that "fracking," as applied to California's Monterey Shale Formation, would "exacerbate…environmental threats, particularly climate disruption, local air and water pollution, and resource consumption."

After noting that fracking "will likely rapidly increase fossil fuel development at a time when California is poised to transition to low-carbon renewable energy technology," the climate scientists expressed a number of specific environmental concerns...

According to the California Air Resources Board (CARB), they said, "30% of the oil developed in California is as carbon intensive to develop and refine as the Alberta tar sands…one of the most climate-disrupting fuels on earth". They said that the worsening climate crisis would be exacerbated by the use of hydraulic fracturing to extract oil from the Monterey Shale formation.

The scientists warned that the fracking process is accompanied by leakage of "large quantities of methane...a potent greenhouse gas with up to 86 times the global warming potential of carbon dioxide." They add that there are "many toxic and carcinogenic chemicals used during the process;" that the process "can also increase the ground-level ozone due to the emissions of ozone precursor emissions, such as volatile organic compounds and nitrogen oxide, a key risk factor for asthma and other respiratory and cardiovascular illnesses." They also cited studies showing that nearby populations risk being exposed to "other contaminants such as lead, arsenic and radioactive materials brought back to the surface with the flowback and produced waters" from the fracking process.

At a time when water starved California is experiencing one of its worst droughts ever --- 2013 is now on track to be the driest in recorded history --- the scientists warn about "the large quantities of water" consumed by hydraulic fracturing, which uses on "average of two to five million gallons of water per well, with some wells using up to 13 million gallons." The disposal of that water, they note, "has also been linked to an increase in the frequency of earthquakes."

The letter comes less than two months after Brown's approval of what the Natural Resources Council, the Center for Biological Diversity and the California League of Conservation Voters described as a "watered down" version of a "fracking" by permit only bill that, they claim, fails to "protect Californians from the enormous threats of fracking pollution." That bill, SB-4, authored by Sen. Fran Pavley (D-Agoura Hills), was passed after three anti-fracking bills --- one seeking a moratorium on fracking near aquifers and two others which sought a blanket moratorium --- failed in a state Assembly where Democrats hold a super-majority. Assembly Republicans have defended the use of hydraulic fracturing.

Just two days after the letter from the scientists, the Brown administration released its proposed new permit regulations, scheduled to take effect in 2015. The draft regulations, "Hailed by state officials as the toughest in the nation," according to the L.A. Times, were praised by Catherine Reheis-Boyd, president of the Western States Petroleum Assn., the oil industry's lobbying group, as something that "strike[s] the right balance." Katheryn Phillips, California Director of the Sierra Club, however, described them as "another example of an agency's continued deference to a regulated entity, even at the expense of public health and the environment," according to the paper.

Just as we found proponents of the Keystone XL Pipeline pushing vastly exaggerated jobs numbers (there 20,000, instead of the more realistic less than 100), here we find the fossil fuel industry making the remarkable claim that fracking in California "could create 2.8 million jobs," according to the above-quoted Los Angeles Times article.

UPDATE 11/16/13: In an ironic aftermath to its publication of what state officials boast are the "toughest" fracking guidelines in the nation, Los Angeles Times published a front-page article, which revealed how California's toxic waste disposal rules --- rules that, on paper, are amongst the strictest in the nation --- have, in practice, proved to be a dismal failure.

"When climate scientists consider the release of those 14 billion barrels into the atmosphere, they see disaster."

And we will see disaster too if green is not given the green light, and polluting fossil fuel given the red light.

Ya Jerry like stop it right now.No Fracking in Ca.Don't be stupid,and allow polluting the world's garden.And...No to the Peripheral Canal.Make some smart decisions Jerry,don't be part of the problem,be a force for good.

In a seismically sensitive state like California, I think the governor ought to read this:

And just think, they're fracking all over the planet now. We may not have just extreme weather, but extreme earthquakes as well.