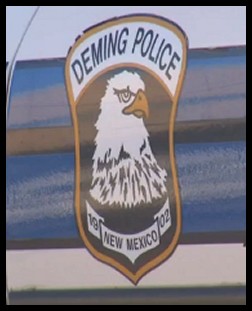 As the disturbing report from Chris Ramirez of KOB Eyewitness News 4 in Albuquerque, New Mexico reveals, police in nearby Deming have given new meaning to the concept of an unreasonably intrusive search.

A routine traffic stop for failing to come to a complete stop upon exiting a Wal-Mart parking lot turned into an extraordinary, fourteen-hour, unbelievably invasive ordeal that Ramirez appropriately describes as "a humiliating violation of a New Mexico man's body by police and doctor."

Deming police officers, according to Dennis Eckert's attorney, Shannon Kennedy, claimed that when Eckert obeyed the command to get out of his car, "he did so in a manner that looked as if he was clenching his buttocks."

KOB4 summarizes the incredible content of the Gila medical records, as they pertained to procedures conducted without Eckert's consent thereafter...

1. Eckert's abdominal area was x-rayed; no narcotics were found.

2. Doctors then performed an exam of Eckert's anus with their fingers; no narcotics were found.

3. Doctors performed a second exam of Eckert's anus with their fingers; no narcotics were found.

4. Doctors penetrated Eckert's anus to insert an enema. Eckert was forced to defecate in front of doctors and police officers. Eckert watched as doctors searched his stool. No narcotics were found.

5. Doctors penetrated Eckert's anus to insert an enema a second time. Eckert was forced to defecate in front of doctors and police officers. Eckert watched as doctors searched his stool. No narcotics were found.

6. Doctors penetrated Eckert's anus to insert an enema a third time. Eckert was forced to defecate in front of doctors and police officers. Eckert watched as doctors searched his stool. No narcotics were found.

7. Doctors then x-rayed Eckert again; no narcotics were found.

8. Doctors prepared Eckert for surgery, sedated him, and then performed a colonoscopy where a scope with a camera was inserted into Eckert's anus, rectum, colon, and large intestines. No narcotics were found.

As reported by Ramirez in the video below, both the Chief of the Deming Police Department and the medical center in Gila have refused to comment in light of the fact that both the department and the hospital are being sued by Eckert in federal court.

Until the powers that control our public servants are made to pay out of their own pocket this crap will keep on going on. Make the police chief pay for the law suit or go through the same procedure and maybe he/she would think twice about this injustice.

Man, to me this story has NSA fingerprints all over it. Heard they have been doing this. As in they do their eavesdropping thing, hear about a drug deal, alert the police to be at such and such a place, find some reason to detain and search the target under false pretenses and make your arrest. Nothing else makes sense going to the extreme unless they KNEW something was up(no pun intended).

This is an unbelievable story that should frighten everyone. The abuse heaped on this man by the police and the doctors is insane. They claimed he clinched his buttocks and that was sufficient for a search warrant? What idiotic judge signed off on that? Doing a surgical procedure- a colonoscopy- on a person not needing one? Let alone all the digital exams and enema's. I'm guessing after the first "exam" and enema they were digging deeper because they knew they had royally screwed up and were determined they had to find something to save their asses. It seems law enforcement in America is trying to take after the KGB of old. People should be afraid- very afraid. And then let that fear propel you into action to demand these abuses end posthaste. The fact that the hospital is trying to bill him for something he did not consent to have done is just another part of the insanity.

Man, to me this story has NSA fingerprints all over it.

The NSA has got nothing on these guys, Joe. They spend billions so they can capture every electronic communication.

But leave it to the tiny Deming PD to really get the inside scoop.

Because when a suspect clenches his buttocks, "It's in there!"

Let me take a wild guess that the race of the torture victim is something other than "white"?

There was nothing in the report, Randy D, to reflect that race or ethnicity played any role whatsoever in this case.

According to the complaint filed in Eckert v. City of Deming, Eckert was pulled over by Deming Police Officer Robert Chavez “for an alleged failure to yield at a stop sign.”

"Chavez," according to the complaint, "did not witness the alleged traffic violation, but was acting on the report of [Officer Bobby] Orosco, who had called…Chavez about the traffic violation."

The complaint differs somewhat from the news account. It alleges that after Eckhert was pat down, Chavez noticed that Eckhert’s "posture to be erect and he kept his legs together."

After a third officer, Villegas, arrived to issue the traffic citation, Chavez initially told Eckhert he was free to leave but then started to interrogate him; searched his car (Eckhert and the police dispute whether he gave consent). Multiple additional Deming police officers arrived at this "routine" traffic stop with a canine, "LEO", who "allegedly alerted to the driver’s seat."

The complaint reveals that Eckhert had been stopped just outside his home previously by Hidalgo County Sheriff Deputies for a cracked windshield and ordered to step out of his vehicle "because [Eckhert’s] hands were shaking."

"LEO" had been deployed on that earlier occasion, a warrant obtained but no drugs were found in his car.

One suspects that suspicion embedded in the minds of these two police departments, like tics on a hound; that the failure to yield was a ruse for everything that followed, and that, irrespective of how irrational their actions might appear to any objective, outside observer, in the minds of these local cops, they were certain they had targeted a narcotics user; just needed to probe a little deeper to prove it.

I think there is a lot more to this story. I smell a big rat. I read elsewhere, that the cops have had it in for this guy for a long time. He has been arrested several times for drugs but never prosecuted. This cop shop is clearly out of control. I bet this is probably not their only abuse.

Wow! He has a great case. I hope he gets some restitution for this. I wish the people personally involved would be penalized, though (i.e. loss of doctors' medical licenses, personal civil damages awarded that officers involved personally have to pay out of their own bank accounts, etc.)

Usually doesn't work that way, Katie B. No doubt there will be a settlement paid for by the taxpayers of the city and county plus the hospital or its malpractice insurance carriers.

In that part of the country the typical media-fed "race" issues don't exist the way we are always led to believe they must exist. It's a toss-up whether the primary power-holders are hispanic or caucasian. Even if you can make assumptions based on the name, chances are equally good that your assumption will be wrong in any event, due to several generations of surname-sharing that comes from marriage.

You're just as likely to see a pasty-whitebread with a last name of Rodriguez as you are a swarthy dude with a thick accent named Jones. It simply doesn't work the way you believe, Randy.

One thing we know for certain, though: Eckert is not even slightly native American ... the ACLU would have been all over this if he was. The x-ray film wouldn't have been developed before they'd have been in court getting an injunction.

Why is it reported as FACT that the cop's victim failed to come to a complete stop? Is there an assumption that cops tell the truth? I have been covering this story on my radio show and will give this blog a shout out today at 9am pacific time on Freedomizer Radio.

Why is it reported as FACT that the cop's victim failed to come to a complete stop?

Please keep in mind that this article simply recounted the original report provided by Chris Ramirez of KOB Eyewitness News 4.

As I acknowledge in comment #8, which references the allegations contained in the federal complaint, it is quite possible "the failure to yield was a ruse for everything that followed."

Whether or not there was or was not a failure to yield, the alleged offense, even if it did occur, did not justify the extraordinarily intrusive search that followed.

And it was that extraordinarily intrusive search, not the question of whether or not there was a failure to yield, that makes this item newsworthy.

I've been following these police craziness stories for years, BUT this is surreal. This storry has leg's to be sure, it's going to cost SOMEBODY a boatload of cash down the road. The Chief of Police at Deming looks that that fat stupid Chief on the Simpsons. Wouldn't want to be in his shoes after all this shakes out.