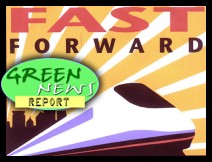 The administration has already devoted $10.5 billion to passenger-rail programs, with the bulk of the funds going toward California and Florida high-speed rail projects that are currently in the planning stage.