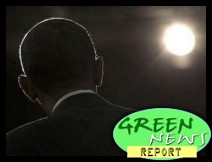 IN TODAY'S AUDIO REPORT: The State of the Union: Obama does not back off the push for clean energy --- but will the Senate listen?; Big new funding for high speed rail ... PLUS: How much will it all cost? ... All that and more in today's Green News Report!

« PREVIOUS STORY "State of the Union. Here We Go Again..."
» Go to The BRAD BLOG front page «
"VIDEO: Crazy Andy Breitbart Blows Himself Up On Air. Again." NEXT STORY »