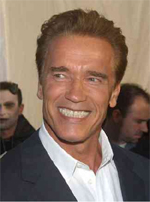 Gov. Arnold Schwarzenegger says he is ruling out running for the U.S. Senate against Barbara Boxer in 2010. The governor was asked about his post-Sacramento plans after a Field poll showed him with a 1 percentage point lead over Boxer in an imaginary Senate match-up.

Boxer's dip in popularity probably reflects the general unhappiness among California liberals with the failure of Congress to hold Bush and Cheney accountable for lying in the run-up to the Iraq occupation and their systematic shredding of both the U.S. Constitution and the Geneva Conventions, just for starters.

But Boxer has arguably done as much as she could to hold the Bushies accountable. And in her 2004 reelection bid she received the third highest number of votes of any candidate in the country, next to Bush and John Kerry, respectively. She will likely bounce back. (On the other hand, rebounding is less certain for our other senator, Dianne Feinstein, who outraged her constituents last week by voting to confirm Michael Mukasey as Bush's new attorney general, even after Mukasey indirectly acknowledged that he will continue to greenlight and give cover to Bush's torture policies. Feinstein is not up for reelection until 2012.)

Mainly, though, it's hard to imagine Arnold Schwarzenegger as just one of 100 big fish in the Senate pond.

Schwarzenegger also ruled out running for mayor of Los Angeles. This is a no-brainer. There is very little glory in being L.A.'s mayor. For one thing, the balance of power here tilts more toward the city council, and less toward the mayor, than in most big cities.

For another, despite the city's propensity for earthquakes, riots, and wildfires, no Los Angeles chief executive has ever been dubbed "America's Mayor" because he stayed on the job during a crisis. Unless there was a chance Arnold could become another America's Mayor, it is unlikely he'd be interested.

« PREVIOUS STORY "2007 U.S. Troop Fatalities in Iraq and Afghanistan at All Time High"
» Go to The BRAD BLOG front page «
"Hanging With Winguts in Their Well-Constructed Imaginary World" NEXT STORY »

READER COMMENTS ON
"Schwarzenegger Says He Won't Run for Boxer's Senate Seat in 2010"
(3 Responses so far...)

Even the terminator is better than she is. He makes changes in the proper direction.

Remember Boxer was the ONLY Senator who would support Stephanie Tubbs-Jones and the other Representatives who brought charges of election irregularities (fraud) to the Senate after the 2004 Election. I have been mightily disappointed (disgusted) with the Democratic Congress in general, but the reality is that Boxer is one of the best there is.

Arnold Schwarzenegger is a right wing liar and his heart still pumps neo-con blood. let's not forget how he came into office, through a criminal GOP, Cheney, energy scam recall. Don't Trust Schwarzenegger! (no matter how many times he says, "trust me".

i agree, Boxers good for the people!