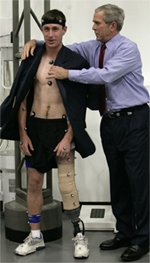 READER COMMENTS ON
"2007 U.S. Troop Fatalities in Iraq and Afghanistan at All Time High"
(13 Responses so far...)

I am astounded that they would even be willing to meet the criminal responsible for their loss of limbs, never mind play computer games with him.

Social masochism and "I am the Decider Sadist" mindset is the foundation of our social dynamics these daze.

"US President George W. Bush had a shoot-out with the "bad guys" in Iraq on Thursday,"

That photo makes me even sicker than Dredds man/Coulter thing.

Dredd got me a new keyboard now it's Jon's turn.

"And he wore a kingly crown;
And in his grasp a sceptre shone;
On his brow this mark I saw -
'I AM GOD, AND KING, AND LAW!'"

So are these the only soldiers that were lucky enough to receive medical treatment?

The rest were probably dropped off on a street corner and given a 5$ off coupon for the Walmart pharmacy.

Did he order up some amputees for the photo op? Blow off some guy's leg so you can display some "sympathy" for the cameras?
The only question is this greaseball smart enough to know what he is doing? He is surely aware that everything the administration says is BS and that he is getting people killed and maimed so his buddies can make more money.
If we get a Speaker of the House with some balls, maybe we could take this guy down. Meanwhile get ready for Giuliani.

And therefore to the peakists I say, You can declare victory. You are no longer the beleagured small minority of voices crying in the wilderness. You are now main streams. You must learn to take yes for an answer and be gracious in victory.

It gets better, we now have hard evidence that peak oil happened in 2005:


"May, 2005, still stands out as the all-time record high for global crude production 74.3 million barrels per day, and now we're down 1.2 million barrels per day. The IEA shrug that off, saying that if you look back over the last few years, records have been set several times; a peak followed by a falling off, then another peak, and so forth.

"That's an interesting thesis. But as we watch Mexico start into its big-time decline and UK and Norway continue their rapid declines, plus Indonesia, Egypt, Argentina and others besides you can see several years of relentless decline. Add them up and say, find me one area coming on in the next few years that will halt such a collective decline it's just not there.

"Major oil companies have quadrupled their spending over the past five years and, other than acquisitions, basically they're in liquidation."

(Matt Simmons, president of the energy bank). The new oil rig the oil king uses is a soldier and his weapons.

There is no new oil to find that even begins to meet the reality, so stealing what is already in the hands of weak nations is the new oil strategy for the 21st Century. And of course don't forget deceit of the people about it.

And so it can be said that the US is the greatest exporter of oil "drilling" equipment (military hardware, weapons).

Busted flat in Baton Rouge, waitin' for a train
And I's feelin' near as faded as my jeans
Bobby thumbed a diesel down just before it rained
It rode us all the way into New Orleans
I pulled my harpoon out of my dirty red bandana
I's playin' soft while Bobby sang the blues, yeah
Windshield wipers slappin' time, I's holdin' Bobby's hand in mine
We sang every song that driver knew, yeah

I think I'm finally done voting for arlene. Too many floaters, during this criminal record!

THAT, is one sick mother ****er you have there at the helm. How he can look those guys in the eye, never mind play war games with them, is beyond understanding.

He is WAY overdue for an accounting for all the grief he's brought to millions of people. Surely, there MUST be justice somewhere in this world, and he and his oil cronies will be brought to task for their ghastly crimes.

Are you listening, Pelosi ?

I clearly remember her talking impeachment, but THAT was before she became Speaker of the House. How quickly she changed her tune once she got her grubby little mitts on that gavel. She should go down with the rest of them.