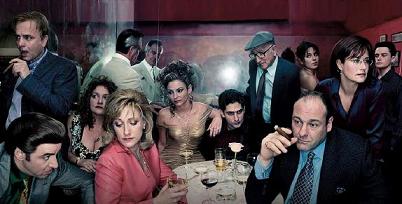 You need to allow a third choice, as in don't give a crap.

I wish they would not try to cover up Cheney's family history by calling it "Sopranos". Have you heard him sing yet?

I didn't come up with these, but they definitely help to explain the ending:

Fun Facts about the Sopranos last scene: #1 The guy at the bar is also credited as Nikki Leotardo. The same actor played him in the first part of season 6 during a brief sit down concerning the future of Vito. He is the nephew of Phil. #2 The trucker was the brother of the guy who was robbed by Christopher in Season 2. Remember the DVD players? The trucker had to identify the body. #3 The boy scouts were in the train store when Bobby was shot. #4 The 2 african-american actors that walked in at the end were the ones who tried to kill Tony and only clipped him in the ear in season 3.

Wow. Good (and creepy) info, Elliot. Only, of note, of course, for those of us, unlike KenoshaMarge, who *do* give a crap

Sopranos has been a brief but welcome one-hour respite from our various nightmares for so long. Terribly sad to see it go. But did enjoy the way it went out

(Even if I do suspect it'll be back in some form, as a movie, for example. Which would be great! Giving me a reason to go to the movies again for the first time in god knows how long!)

Hurray, the most recent edition of over-blown machismo is over and our society can stop looking to these psychotic creatans for our male role models!!!!
Does it come as no surprise to anyone that while our country is involved in a war of pride that we are coincidentally transfixed to a group of self-centered and maniacal characters whose main characteristics are revenge, pride and self gratification.
Can we all get past juvenille delinquency and grow up?

I didn't watch the Sopranos, although I felt very dissatisfied by the way X-Files ended. You got the feeling that Chris Carter didn't work out the story arc from the beginning and that he just strung the series along the last couple seasons to make money.

It's too bad because there were some very good episodes along the way. I can't bring myself to ever getting that series or film on DVD.

ps. Why is it assumed that everyone subscribes to HBO, a premium channel?

"Always with the drama!" A.J. to Carmela in the kitchen during the conversation about A.J.'s plan to enlist in the Army, which was the same line said by Johnny Boy Soprano to Livia in the flashback to the Soprano home in the 1960s.