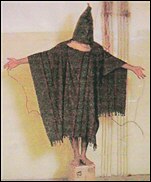 Most Americans believe that John McCain's anti-torture bill clearly protects prisoners in U.S. custody from abuse. Most Americans also believe that the conditions for detainees have improved since the Abu Ghraib scandal and some initial problems at the U.S. detention center in Guantánamo Bay, Cuba.

Republican PR efforts to change American's perceptions of detainee treatment have been have been successful. The truth is that the Bush Administration has used the McCain anti-torture bill to codify a policy of torture that is now embedded in our legal system for perpetuity. 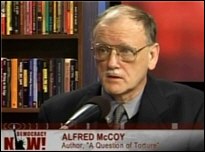 Professor Alfred McCoy is the author of a new book, "A Question of Torture", in which he gives a history of US torture from the CIA's development of torture techniques through the latest generation of systematic torture in the Bush Administration's "war on terror".

McCoy explains how the Bush Administration has purposefully crafted a strategy of torture. They have claimed executive powers and have had laws re-interpreted by Administration lawyers to give the government the power to continue the practice. Loopholes slipped into the McCain bill now ensure an enduring policy of torture.

Due to the focus on detainees' human rights at Guantánamo, the U.S. is quietly expanding a detention center at Bagram Air Force Base in Afghanistan. In the past few years, the population has increased by 5 times. While there has been significant legal action over Gitmo, little has been done for the detainees at Bagram. Many say the conditions at Bagram are far worse than even during the height of the Abu Ghraib abuse.

« PREVIOUS STORY "It's Hard Out Here for a Pimp..."
» Go to The BRAD BLOG front page «
"MD House Committee Votes 20-3 to Scrap Diebold Touch-Screens in State!" NEXT STORY »

Saw that one coming...'signing statement' / 'not US soil'...Neo-Convict sick bastards. CLEAN HOUSE 2006

Very chilling video. Thanks for posting it.

Selma all over again!

Hate to racialize this, but if not me,then who!

Visualise this: the 9-11 hijackers were blue-eyed, Serbian muslims, and the Bush Administration starts filling up Guantanomo with blue-eyed, mostly innocent, ethnic Serbians and violently torturing them. News footage is broadcast around the world. What would happen? Please share.

Speaking of sharing, I wanted to share my true account of human right's violation at the hands of the FBI in Sandy Springs, Georgia. The URL for my story is embedded in my name. If there are any human right's attorneys out there, please help!

Deborah, have you tried to use a habeas corpus petition?

I read your terrifying tale. My hat's off to you for your courage and perseverance. I hope many people read your link, and that it helps wake this struthious country up. God bless.

Last May Cheney appeared on Larry King. He stepped in it big time, but few people caught it. I alerted Rude Pundit and he wrote about it.

Cheney and Gonzales have been playing a semantics game to justify torture, since "war" was never formally declared. It's pretty obvious why they chose to embark upon the path of war without ever formally declaring it - so they could not be held accountable for the War Crimes they knew they'd be committing.

Bush tells us every day that we're at war. Cheney and Gonzales tell us that we're not REALLY at war.

Problem is, Cheney is on tape stating not only that we are at war, but that we are holding "prisoners of war."

The Geneva Conventions DO APPLY, and Cheney is guilty of war Crimes.

KING: They specifically said, though, it was Guantanamo. They compared it to a gulag.

D. CHENEY: Not true. Guantanamo's been operated, I think, in a very sane and sound fashion by the U.S. military. Remember who's down there. These are people that were picked up off the battlefield in Afghanistan and other places in the global war on terror. These are individuals who have been actively involved as the enemy, if you will, trying to kill Americans. That we need to have a place where we can keep them. In a sense, when you're at war, you keep prisoners of war until the war is over with."

So this is the war without end, and these prisoners will be held forever?

Treasury Secretary John Snow, whose department headed the panel that approved the Dubai Ports deal, came to the Bush administration from the chairmanship of CSX, a rail firm that sold its own international port operations to DP World the year after Snow joined the administration. The new head of the Maritime Administration, David Sanborn, worked for both CSX and Dubai Ports.

Like Snow, Sanborn was a CSX executive—until he left to take a directorship with Dubai Ports World, where he brokered a deal in which Dubai PW bought CSX’s Asian and South American port operations.

It would be helpful to understand what Snow knew about the likelihood that he could be in a decision-making position related to DP and CSX when he agreed to join the administration. One would also wish to learn more about the specifics of the underlying relationship between DP World, CSX, the United Arab Emirates government and the Bush White House and family fortunes.

"IT'S THE PORTS SCANDAL, STUPID!"

Meanwhile, the chief propaganda master is in London telling them how much we hate torture (link here).

Even Blair doesn't believe him:

Deborah, I'm sure there's better experts than me on what to do. But I'd contact independent media sources to publicize this, like American Free Press, Democracy NOW! news. How about the ACLU? Anyone else have some advice?