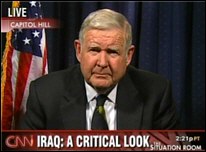 For instance, water supply, the electricity supply, the oil supply. All those things are prewar level. And there's no way they're going to settle.

Unemployment is 60 percent. There's no way they're going to settle this by talking about it. It's not rhetoric.

And the military has done everything they can do. They have done a marvelous job. Now it's up to the political leaders to take hold of this thing and settle it themselves.

And, you know, I keep getting different reports about the Iraqis being ready to take over, and then the next day they say there's no battalions ready. But the Iraqis themselves have more confidence in their police and in their army than they do in the United States Army.

Related: Zogby poll via ThinkProgress - 72% of U.S. Troops Want Out of Iraq Within One Year. 29% of U.S. troops serving in Iraq favor "immediate" withdrawal.

READER COMMENTS ON
"VIDEO - Rep. Murtha: 'We have become the enemy and our troops are the targets'"
(22 Responses so far...)

Murtha has been on point since he first came out with this, he'll go down in history as the one who began the end of the American occupation of Iraq (not a war), with the protestors like Cindy, only getting a slight mention (as usual)
I guess I don't really care who they credit, as long as its over soon

My kid showed me this one, its hilarious

George Bush has no intentions of pulling our troops out of Iraq, at least not until he launches an attack on Iran over the trumped up nuclear issue.

I believe the U.S., Brits and/or the Moussad was responsible for the blast of the Golden Shrine last week in a bid to fracture the Iraqi Shiite's hold on the government, and stir up trouble with the Sunnis.

Bush will face a real problem if the Shiites manage to avert a civil war because a unified Iraq will turn on the Americans if Bush nukes Iran.

I hope that doesn't happen, but if it does, our 140,000 troops are going to be sitting ducks for the thousands of Shia militias who will turn on our soldiers with a fury because they are aligned with Persia.

The soldiers want to come home right now because they know what going to happen in the near future (within two months, I figure).

If Iran is attacked, we are in for real trouble!

Is that your prediction or your hope?

#6 Medium Right, you're obviously a kool-aid drinker who, like Bush, adds 1 + 1 and comes up with 3 for an answer.

You don't think Bush is going to attack Iran? What the hell do you think this whole Mideast operation is about, you jerk!

Grow a brain and perhaps you may be able to add something constructive to this blog ... although I doubt it. And that, my friend, is a prediction.

I agree Lou #5, but I don't think Georgie really knows whats going on over at Rumsfeld's Death Star half the time
If you replaced his name with Rummies, we'd be in total agreement

Lou said "I hope that doesn't happen" so I think we can conclude that his post was a prediction....
Besides Lou is not in charge, king George is. So the question is : What is his prediction?

Recently at the Arab League conference in Cairo, all three factions in Iraq, that's the Sunnis, Shiites & Kurds, got together & agreed on something, which is rare.
You guessed it.
They demanded US troops withdraw.
They also agreed that opposition forces in Iraq have a "legitimate right" to oppose the US occupation & fight American troops as long as civilians are not targeted.
This means that even the Iraqi leaders the US is supporting have agreed that attacks on US forces are legitimate!
The Iraqi government is NOT democratic either. They declared, in their constitution, that their religion rules Iraq, just like it always has.
In Iraq, their religion IS their government--the clerics take the money & distribute it & the clerics tell them all what to do. When you see all those men lined up tightly with one fist in the air & ranting--it's because there cleric told them to get out there & protest & they better do what he says or there are consequences.

We need to leave.

LOL.. this asswhipe is using different names and hitting all the threads.. Won't be long before TrollBoy here is banned and his posts deleted.. what a fucking moron... er wing-nut..

Under comment #12, my screen just has fuzzy lines that I can't read.
Too bad someone made an entry that can't be seen & therefore, can't be commented on.
I know all of your screens are malfunctioning in exactly the same way, right group?

Oh, and Medium [has his head]Right[up his ass].. Apparently your being a Shrubby worshiper is based on your not being able to read a simple post.. I recon that says a lot.

"I hope that doesn't happen, but if it does, our 140,000 troops are going to be sitting ducks for the thousands of Shia militias who will turn on our soldiers with a fury because they are aligned with Persia.

The soldiers want to come home right now because they know what going to happen in the near future (within two months, I figure)."

That means, he HOPES nothing bad happens, but doesn't have much faith in things blowing over. That's called being "realistic" and trying to be prepared. To that, you asked ..

"Is that your prediction or your hope?"

Being the troll that you are, I'm presuming you're trying to say "you damn liberals want things to get worse, you want terrorists to attack so you can say 'see, we are right!' ".. problem is, that's the WING-NUT position.. HOPE there's another terror attack (or problems over seas) so you can say "see, we need to take away more of your rights, put you in camps, destroy the constitution.. that's the only way we can protect you.. oh, and we'll pull you out of those camps to go kill people from other countries.. we need them dead to protect you, too"..

You are such a partisan shit-bag that you can't pull you head out of your ass long enough to see that the sentiments on this blog are generally that we want PEACE.. we want DECENCY to win, not greed and fear and ignorance. YOU want the antithesis of that so you can "increase your parties power" and rape and pillage the country (and world, eventually). NO ONE ON THIS BLOG WANTS BAD THINGS TO HAPPEN TO ANYONE.. well, maybe to you, but not to the innocent Iraqi civilians our government keeps bombing, not to our soldiers, and not to the American principles (which are being shit on by your commander in chimp.. you know, the prick who swore to uphold what he calls "a god damned piece of paper!" ?)..

Murtha has my respect for the way the reacted to Snottie saying "Murtha is acting like Mike Moore", and mean jean saying he was a coward.

He just kept on putting out the facts and saying they will get it later.

Medium Wrong: Please shut up and join our military in Iraq. Put your money where your mouth is.

Why is Murtha so mum on israel and there parts in this? Why does he want to RE-DEPLOY? Why Not bring home your sons and daughters? Are you all so far gone that you can not see the evil things and places your berzerk government has un-earthed? Can EVEN one of you Americans JUSTIFY using Depeleted Uranium tank and anti-tank rounds not to mention the 230 other military uses for this TOXIC nuclear/chemical agent?

this is a real can-o-worms America look forward to hearing a CRAPLOAD on this from ME!

This is the republican EPA solution to deadly uranium (DU) we can't find storage for.

The republican solution is to just put the stuff in bombs, shells, mines, bullets, and the like, and put them in other countries by shooting at them.

They have a very perverted sense of the "environment", thinking ignorantly that the environment stops at the american border.

Please have patience, we are trying to get rid of these trigger happy fascists.

I also oneself something would want to find out on this theme. Very attentively I will read every post.

I also oneself something would want to find out on this theme. Very attentively I will read every post.