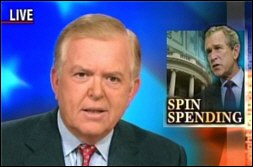 The GAO has release a report that details how the Bush Administration has spent over $1.6 billion on "advertising campaigns" in the last 30 months alone.

The report was requested by Congressional Democrats about a year ago after press reports indicated that the Bush Administration was engaged in using "covert propaganda" on the American people.

The RAW STORY has some comments from House Democrats:


"The government is spending over a billion dollars per year on PR and advertising," said Rep. Waxman. "Careful oversight of this spending is essential given the track record of the Bush Administration, which has used taxpayer dollars to fund covert propaganda within the United States."

"No amount of money will successfully sell the Bush Administration's failed policies, from the war in Iraq, to its disastrous energy policy, to its confusing Medicare prescription drug benefits," said Democratic Leader Pelosi. "The American people know the Bush Administration is on the wrong track and the White House PR machine won't change that fact."

"The extent of the Bush Administration's propaganda effort is unprecedented and disturbing," said Rep. Miller. "The fact is that after all the spin, the American people are stuck with high prescription drug prices, high gas prices, and high college costs. This report raises serious questions about this Administration's priorities for the country and I would hope that my colleagues on both sides of the aisle would agree that changes need to be made to reign in the President's propaganda machine."

"It is unbelievable that the Administration, on several occasions, has used limited taxpayer dollars to secretly promote initiatives such as No Child Left Behind, while underfunding money for our schools, books, technology, and after school programs," said Rep. Elijah E. Cummings.

Every where we find a tip of the iceberg, the neoCons say we are making a mountain out of a molehill.

Fact is, our criticisms have been measured, and the neoCon regime has been doing far worse than we had imagined.

On all fronts, from illegal spying, to illegal propaganda, this regime is the worst in US history.

2. Get out the film of all the Republican leaders on TV, pimping the budget in which we're cutting education/medicare/medicaid, all the quoted from Republican-only leaders, saying, "We must all tighten our belts and sacrifice", when explaining cuts in the budget for poor/middleclass. BUT.... they're spending $1.6 billion on propoganda???

3. This is for Republican leaders, only: Exactly WHO has to tighten their belts and sacrifice for this budget???

Well, let's not forget.. we're cutting 100s of millions (perhaps a billion or 2) from the poor/middle class, but now we're ALSO going to let Big Oil (you know, those guys who just posted over $35 billion in PROFITS) get away with NOT paying royalties on oil taken from public lands.. to the tune of $7 BILLION..

I can't get my head around people who think it's super to let the richest 10% of our country not pay any taxes and get FREE MONEY from PUBLIC RESOURCES, but think it's terrible to make sure human beings aren't starving to death or freezing to death..

To put this in perspective, the Corporation for Public Broadcasting receives roughly $300 million in federal funding each year (I think that's a high estimate). Over 30 months, that makes a grand total of about $750 million ... less than half what Bush spent on propaganda.

Evidently, he thinks it's *much* more important to propagandize us rather than let us view truly stimulating and educational publicly guided programming.

That's a real catapult. For once Bush told the truth.

Oh Oh... Seems our favorite wo...man...thing? propagandist has got her...his...itself into a little trouble

Hmmmm who wants to bet she slides on this too?

No problem there Blue....I'm turning her in, she crossed the line and won't be sliding on a damn thing.

So, we are paying taxes to fund and promote an authoritarian takeover by the rich. We're the third world now. That's how they do it, folks.

Nothing will be really solved until the radical redistribution of wealth of the last 25 years is reversed. I'm afraid it's a fact of life.

I believe it was KestrelBrightEyes who said it best, "Karma's a bitch." If this is true then there's some people who have some horrible Karma coming there way.

How about all those video's of Republicans, about a month or so ago, saying they have to cut social programs for the poor because we all have to "sacrifice and tighten our belts". How about rolling those video's now? MSM should be doing this, that's what they are supposed to be doing!

WHERE ARE THE VIDEO'S???

Shouldn't money spent on promoting the Global War on Terrorism come from Republican party coffers or private sources? In what way should the government be promoting a war when it would do better to spend the money on fighting the war?

Because they are foreign neocons...they dont give a shit about america, and are only interested in the welfare of their countries. And the money to get them there....

You said "I can't get my head around people who think it's super to let the richest 10% of our country not pay any taxes and get FREE MONEY from PUBLIC RESOURCES, but think it's terrible to make sure human beings aren't starving to death or freezing to death".

I hear that loud and clear. And I can't understand why the religious right can not see the moral issue in this. I mean the scripture they use says:

Pure religion and undefiled before God and the Father is this, to visit orphans and widows in their afflictions, and to keep oneself unspotted from the world. (James 1:27, emphasis added)

My brothers, do not have the faith of our Lord Christ, the Lord of glory, with respecter of faces. For if there comes a gold-fingered man in fancy clothing into your assembly, and if there also comes in a poor man in shabby clothing, and if you have respect to him who has the fancy clothing and say to him, You sit here in a good place, and say to the poor, You stand there, or sit here under my footstool; Did you not make a difference among yourselves and became judges with evil thoughts? Listen, my beloved brothers, has not God chosen the poor of this world rich in faith and heirs of the kingdom which He has promised to those who love Him? But you dishonored the poor one. Do not rich men oppress you and draw you before the judgment seats? Do they not blaspheme that worthy Name by which you are called? If you fulfill the royal Law according to the Scripture, "You shall love your neighbor as yourself," you do well. But if you have respect to persons, you commit sin and are convicted by the Law as transgressors. (James 2:1-9, emphasis added)

It is a moral issue and it is immoral what the republicans are doing to the poor. They have the power in the white house and in the congress, and it is time for them to face the music of accountability. In November.

They are not "foreign neocons", they are US republicans. Get a grip.

The republicans run the white house and the congress. They are american neoCons, and to shift the blame away from them is to defend them.

I would agree that they have a right to a defense in their criminal cases, however, they also deserve a prosecution.

The great majority of that prosecution must come in the November election. The people will prosecute them out of office.

They deserve no less.

And I am going to ramrod that message home everytime they are defended on this BLOG. The Brad Blog is a fair blog and it does not cover up the crimes of the republicans who have allowed the neoCons to hijack their party, and by allowing that, provided a safe haven for the destruction of American values.

This will not stand, and come November, KARMA voting machines (the will of the people) are going to stick it to them like never before.

The Republicans have control of election outcomes through HAVA.

It would be a shame if some nut case or some conspiracy assasinated Bush & Cheney.

I mean, even though they've lied to start a war which is killing our sons & daughters every day, & even though they're doing everything in their power, & outside their legal power also, to screw Americans against our will & we can't stop them, it would be a downright shame for our country to have to go through two of our leaders bloody deaths & two funerals--considering all the other strains we're having to go through at this time. It would be so hard on Barbara & the girls.

Sometimes I'm afraid someone will kill them.

Have you heard that there is no presidential election in November, but many in the House are up for election. (and a few in the senate)

Do you have any questions as to how this will effect all things HAVA and all things lawsuit in the federal courts?

I have no idea what you are talking about with respect to any harm to anyone.

Time to start educating ourselves about the realities now forming before us.