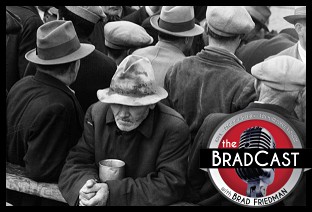 It's NICOLE SANDLER back again to guest-host today's edition of the BradCast. [Audio link to show is posted below.]

It's a crazy time in American history as, under the background of a global pandemic for which there is no cure, vaccine or treatment, we have an out-of-control President who hasn't got a clue how to handle the economic meltdown we're experiencing. So I called on my favorite expert to talk all things economic-- STEPHANIE KELTON! With all indicators showing that we've entered depression territory, the time is ripe for her forthcoming book, The Deficit Myth: Modern Monetary Theory and the Birth of the Peoples Economy.

And we have an out-of-control U.S. Attorney General in Bill Barr who last week moved to dismiss the charges against Trump's former National Security Advisor Michael Flynn --- charges to which he'd already pleaded guilty! I couldn't think of a better guest to call on than LISA GRAVES, who rose to Deputy Assistant Attorney General under Janet Reno in the Clinton administration, and is one of 2000 former DOJ officials signing on to a letter today asking Barr to resign...