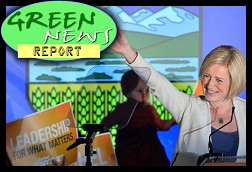 IN 'GREEN NEWS EXTRA' (see links below): Poor in Pennsylvania? You’re Fracked; Fracking chemicals detected in PA drinking water; Bank of America from coal; Ominous fire season ahead for CA with 12m dead trees due to drought; Got a dishwasher? Don't wash your dishes by hand; Report finds US nuclear plants seriously threatened by floods, rising seas; Shell flunks Coast Guard inspections for Arctic drilling... PLUS: Jerry Brown to water tunnels critics: ‘Shut up’ ... and much, MUCH more! ...

Good news about the Canada elections.

PS. The NSA bulk spying on Americans was ruled illegal by a federal appeals court (ACLU vs. Clapper, Alexander, Hagel, Holder, and Mueller - 13).

PS. Mitch McConNeo has a new jobs bill concerning SLR (Will This Float Your Boat - 8).