U.N. warns of 'Emissions Gap' between where we are and where we need to be; Plastic could be a bigger polluter than coal by 2030; PLUS: Rental car giant bets big on EVs... 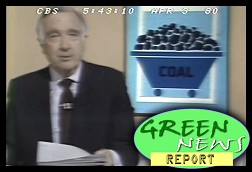 IN TODAY'S RADIO REPORT: Historic, first-ever mandatory water restrictions for drought-stricken California...but no cuts for the state's agriculture industry; Another offshore oil drilling tragedy in the Gulf of Mexico; PLUS: 35 years ago this week, even Walter Cronkite warned us about global warming....All that and more in today's Green News Report!

« PREVIOUS STORY "Pence, Fuller, Good Journalism and 'None of the Above': KPFK 'BradCast'"
» Go to The BRAD BLOG front page «
"Holy Smokes! Indiana's 'Religious Freedom' Law Opens Up a Whole New Can(nabis) of Worms" NEXT STORY »