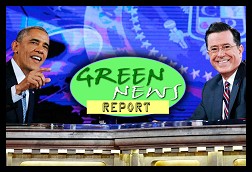 IN TODAY'S RADIO REPORT: Super Typhoon Hagupit blows 2014 into the record books; Doesn't look good for Keystone XL pipeline, if Obama on The Colbert Report is to be believed; PLUS: Rich vs. Poor: Deep divisions stall UN climate talks... All that and more in today's Green News Report!

Senator Inhofe will chair a senate committee and give new power to denialism (see video).


"Even with a deal to stop the current rate of greenhouse gas emissions, scientists warn, the world will become increasingly unpleasant. Without a deal, they say, the world could eventually become uninhabitable for humans."