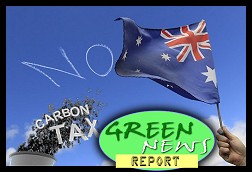 Even if, in spite of the evidence to the contrary, global warming were happening, there would still be those who think that paying a government of parasites money from the sweat of their brow is somehow an acceptable state of affairs, as long as the parasites claim the ability to save you from your fears.

Gee, Abbey @ #1 --- what an unpersuasive, evidence-free comment! Got any specific peer-reviewed scientific evidence to back up your science-denying, ideologically-based claim? With URLs, please.

Luminaries have seen the direction civilization has been going in for a long, long time.

Psychologists have seen the psychological reaction to it down to its core for a long time too.

Only those who refuse to see don't see it.

Even if, in spite of the evidence to the contrary, global warming were happening

What "evidence"? We deal in hard facts and independently verifiable information here, Abbey. So your precise cites to back up your so-far unevidenced claim would be appreciated. Looking forward to it!

there would still be those who think that paying a government of parasites money from the sweat of their brow is somehow an acceptable state of affairs, as long as the parasites claim the ability to save you from your fears.

Nah, has nothing to do with that, no matter the fine libertarian musings you've been hoaxed into being able to regurgitate. Some of us actually have no problem paying a government to do jobs that cannot and will not otherwise be done by anybody but parasites. For example, some of us prefer government funded roads that are free for all to use, rather than having to pay tolls to private companies at each intersection. Some of us enjoy the clean(ish) water and clean(ish) air and safe(ish) food and safe(ish) pharmaceutical medicines and reliable electricity, etc. that comes with accountable(ish), overseeable self-governance, versus unaccountable private parasites who work for profits rather than people.

Many of us would like affordable healthcare for all, as a human right, without the additional costs added on for the profit of parasitical private insurance companies who do absolutely nothing to help improve anybody's health, while simply sucking that profit and good fortune out of the illness and bad fortune of others.

It has nothing to do with fear, Abbey, no matter how many times Mises and his fellow theoretical philosophers, followers, hangers-on and profiteers sell you stuff to convince you as much. Nor does it have anything to do with ideological fantasies...though you are welcome to have, and parrot, both here if you like. But if you could back up your assertions with independently verifiable information, it would make the conversation much more productive, instructive and interesting to all.

Well said, Dredd. That link really does nail it.

Thanks Des. We are all on the same page here at the Green Brad Blog all these years.